Rijkswaterstaat opens mouth of Rhine and Meuse rivers for salmon 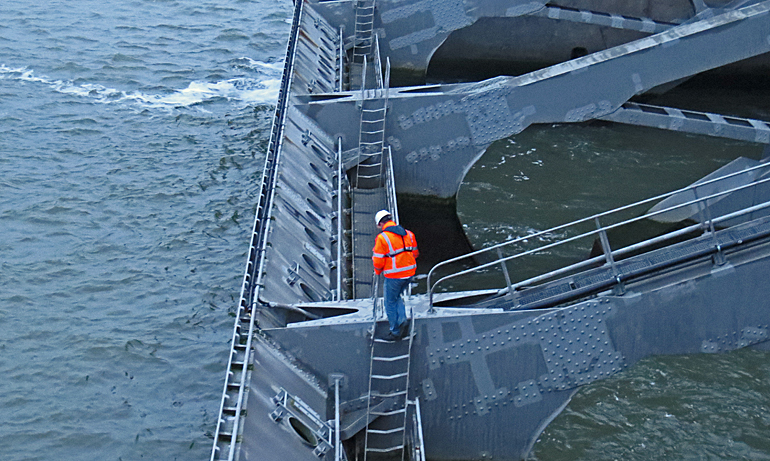 Dutch national water authority Rijkswaterstaat opened for the first time one of the locks of the Haringvlietdam to let in salt water from the sea.

The opening - that took place on 16 January - allows migratory fish to pass the lock on its way from the North Sea to the upper parts of the Meuse and Rhine rivers in Germany, Belgium, France and even Switzerland. This marks the new Dutch water policy of Living with water and a more flexible management of the Dutch coastal zone. 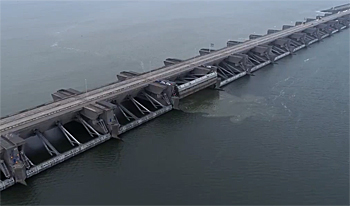 Higher tide on the North Sea (left) allows salt sea water - with migrating fish - to flow into fresh water lake Haringvliet (right). Only one of the 17 locks was opened (Photo: Rijkswaterstaat)

Third function: fish passage
The Haringvlietdam with its 17 locks was built in the 70's as a sea defence to protect the low parts of the Netherlands against flooding from the North Sea.

The construction of the dam with locks was necessary because it also has to be able – at low tides – to charge the water that flows down the Rhine and Meuse rivers. Therefor the Haringvlietdam has two functions: storm defence and river outlet.

Now a third function has been added: a fish passage. At high tides on the seaside, a small opening allows migration fish to swim into the Haringvliet lake.

Restrictions on salination
However, together with the fish, also salt sea water flows into the fresh water lake. Farmers, industries and water utilities use the lake for the intake of fresh water so the salination of lake is restricted.

Rijkswaterstaat expects that it needs at least three years to optimise the control of the 17 locks for the opening and closing for the three different functions, and optimise the fish migration and at the same time prevent the salination of the lake Haringvliet.

On lake Haringvliet three buoyants with underwater salinity sensors, will measure the salt concentrations at different levels. When the salt levels get to high, the dam will be closed.

The data will be used by Rijkswaterstaat to find an optimum for the optimal operation of the lock for the three functions.

More fish migration
The use of the Haringvlietdam as a fish passage, is part of a 40-year-old agreement by all riparian states of the Rhine river, to make the river passable from the North Sea all upto Basel in Switzerland by 2020.

Only three barriers still remain and the International Rhine Commission, that has the international coordinates, hopes fish passages will be realized by 2020.

Joint political will
On occasion of the official opening, Mrs. Martine Rohn-Brossard, President of the ICPR underlined: "Such great targets can only be achieved with a joint political will, good cooperation of all states concerned, great efforts of many institutions and parties interested."

"This opening of the Haringvliet dam is a milestone on the way towards sustainably restoring the Rhine and the Meuse", Rohn-Brossard added.

Chipped salmon
Several young Altantic salmon have already been released at various hatches in the upstream in river bed gravels lacking fine sediments and with high oxygen levels. Some of them are known to have made their way to the North Sea and some adult salmon have managed to return to their spawning areas.

The new control of the Haringvlietdam as a fish passage is expected to give this migration a great boost.

In order to know whether it really functions, some salmon will be caught and provided with a chip so that their migration to the spawning grounds can also be monitored.