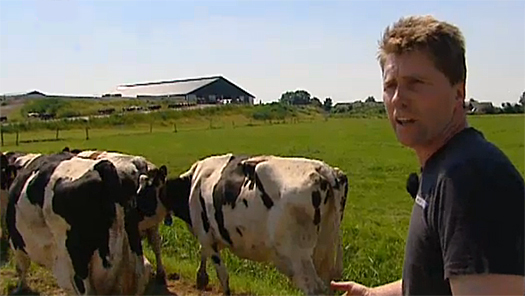 Mark Broekmans is the first farmer to occupy one of the eight mounds constructed in de Overdiepse Polder along the river Meuse in the south of the Netherlands. His family and 100 cows now live on 6 meter elevated ground.

Depoldering by lowering current dike
Once all eight mounds are ready the current river dike will be lowered so, in case of extreme discharges, the river water can flow into the polder. This is anticipated to occur on an average of once every 25 years. 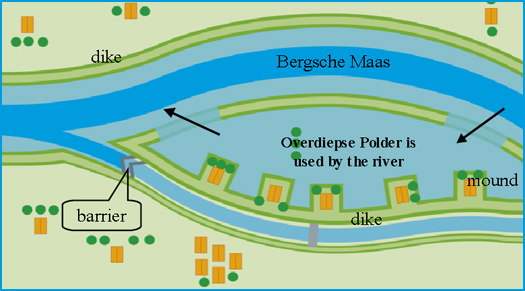 Mounds connected to new dike
On the other side of the polder a new river dike will be raised protecting the in land. The eight mounds will be connected to this dike so the farms remain accessible in case the polder is flooded.

Lowering water levels upstream
In the event of a flooding the high water level in the River Bergsche Maas will be lowered by approximately 27 cm. This reduction of the water level will have an effect on water levels far upstream from the polder, preventing the city of Den Bosch (140.000 inhabitants) from flooding.

Out of the 17 families who originally live in the Overdiepse Polder, eight families will move to the mounds. The others are moving away to other farming areas, one family even to Canada. Throughout the project all families are involved in the decision making.

The mounds cover 2,25 hectares each. To construct all eight mounds, to lower the current dike and raise the new dike, a total of 3 million cubic metres ground has to be moved.

This programme consists of a series of 30 projects, restoring the river’s natural flood plain in places where it is least harmful in order to protect those areas that need to be defended.

The Room for the river programme costs 2,3 billion euro.

New trend in flood risk reducion
The programme breaks the trend of raising river dikes. Higher dikes have the disadvantage that, in case of a flood, more water will flow into the land behind the dike causing more damage.

Therefore the Dutch government decided to start the Room for the River that combines flood risk reduction with regional nature preservation and new recreational activities.