Room for the river programme completes its largest depolderingproject Noordwaard, the Netherlands 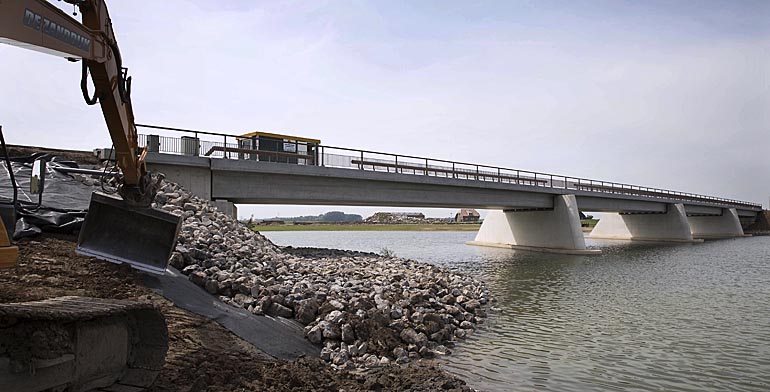 Dutch national public works Rijkswaterstaat can again delete a Room for the River project from its to-do list. On 12 October the partial depoldering of the Noordwaard, near Werkendam, the Netherlands, was officially completed.

Almost half of the original Noordwaard polder is now again subject to regular floods. Once in 1000 years the polder is expected completely flood with only 14 new built moulds and a road connecting them, to stay above water. 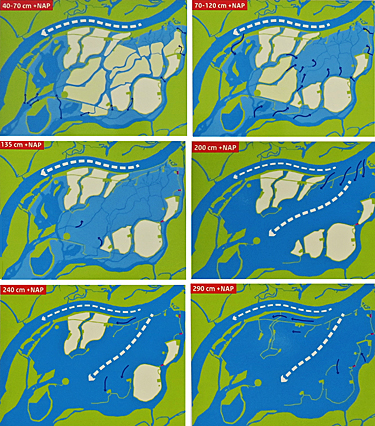 With every high tide the water flows into the polder from the open south side. When the water level reaches 2m the river levee on the north side will overtop and the Rhine will start to flow through the polder. At 2,9 m water level the whole polder will flood.

The Room for the River programme started in 2005 and is scheduled to be ready by the end of this year. So this year many projects are in their finale phase.

The full budget for the Room for the River programme is 2,3 billion euro, of which the depoldering of the Noordwaard took up 300 million euro.

High tides
The 4450 ha polder used to be protected from flooding by a 23 km long levee all the way around.

Now this levee has been removed on the south side of the polder and during high tide the water freely flows into the many creeks to the low lying nature area.

The nature area now covers half the polder and can be under water for up to 100 days per year.

Protection of farmland
The remaining 700 ha farmland is surrounded by several ringed levees and has a protection level of 1:100 years.

The areas with farmland have been clustered in two groups, allowing the river Rhine to flow freely through the polder in case of an extreme discharge.

For this 1:100 passage the river levee on the north side of the polder has been lowered with 3 m over a length of 2 km. 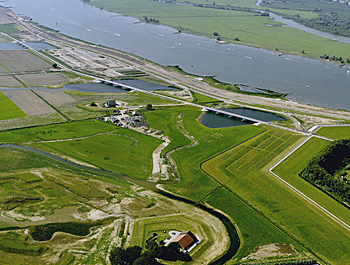 Aerial view of the northern part where the river levee has been lowered and three creeks have been constructed. The new build road conncets the remaining 29 sites with remaining houses and farms.

Additional discharge capacity
This levee has been constructed to withstand an overtopping and the river will start to flow through the polder.

Near the town of Gorinchem, some 10 km up stream, this additional discharge capacity is expected to lower the water level on the river Rhine with 30 cm.

This implies that the river levees near Gorinchem need not to be raised.

Extreme events
In case of an extreme event - that is expected to happen once every 1000 years - the whole polder will flood and only 14 houses and 2 farms that have been rebuild on mounds will remain above water.

Also the road that connects the remaining houses and farms in the polder, is high enough to remain open. 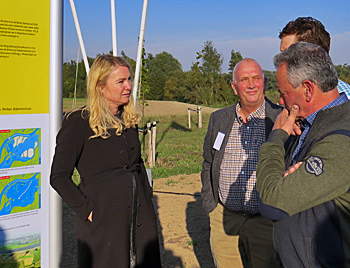 Minister Schultz van Haegen talked with residences on how they had experienced the reconstruction.

Initial resistance
Initially the residents of the polder resisted to the plan by Rijkswaterstaat. The farmers heavily opposed to the plan to reduce their farmland from 2000 to 700 ha.

Intensive consultations followed and the residents calmed down after being promised that everybody had a right to keep living in the polder and farmers that wanted to leave would be fully compensated.

With this promise made Rijkswaterstaat and local authorities could sit around the table with the residents and farmers to discuss a new, more detailed, plan.

Mixed emotions
On occasion of the official ceremony four residences looked back on a turbulent time, in the presence of Dutch minister Melanie Schultz van Haegen of Infrastructure and Environment.

Some residents became visible emotional and admitted to have underestimated the impact of the 10 year period of negotiations, the demolition works and finally the reconstruction.

Minister Schultz van Haegen assured that her ministry, Rijkswaterstaat and the local authorities had learned to listen more seriously to the residents. She promised that these experiences will be used in future flood protection projects.