Room for the River programme nears completion with new by-pass on IJssel river, the Netherlands 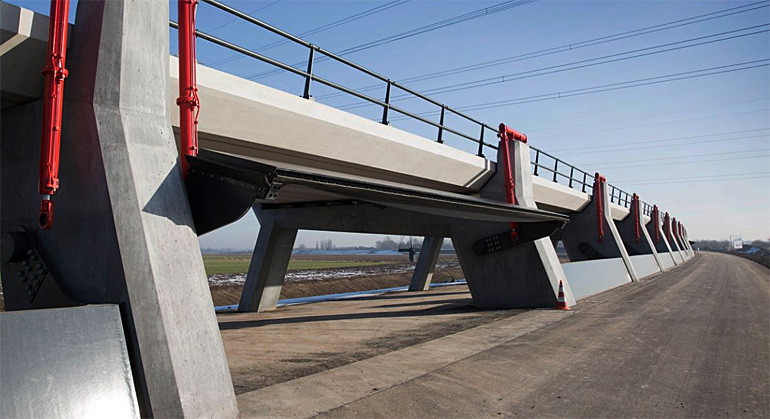 The new by-pass is one of the last in a series of 30 projects of the national flood protection programme Room for the River and is designed - in case of extreme discharges - to lower the level of the river IJssel by 71 cm.

Unique is the 800 m wide inlet work (on top photo) with 62 adjustable openings. The project ended up costing 190 million euro and was realized by a consortium of two contractors, Boskalis and Van Hattum and Blankevoort. 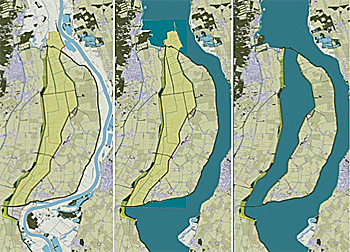 Additional discharge capacity
In case of extreme high water levels the valve of the inlet work will be lifted, allowing the water to enter the by-pass. This will increase the river’s discharge capacity with an additional 1.145 m3/s.

That is 45 percent of the total discharge capacity of the river at that specific location.

For the creation of the by-pass two new parallel levees were constructed with a total length of 8 km.

At the end of the by-pass an outlet work and two pumping stations allow to drain the by-pass after the flood event.

Under normal conditions the by-pass is used by meadowland farmers. 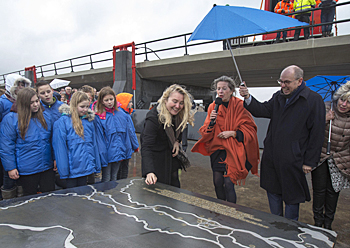 National flood safety
Some six farmers have moved and nine houses were broken down. Initially the project faced enormous resistance by local residents and farmers.

The responsible water authorities, as well as the contractors, put a lot of effort in communication, trying to explain the necessity of the project and to anticipate on the nuisance from construction works.

In their communication the water authorities emphasized that the additional discharge is part of a national programme to increase the flood safety for 4 million people that live along the main rivers that cross the Netherlands.

On the occasion of the official commission, some residences told the media that they have not been convinced of the necessity for the new flood plain.

The programme has two objectives. By giving the Rhine river more room its discharge capacity will rise from 15.000 m3/s to 16.000 m3/s. Additionally the projects will improve the spatial quality as well, making the river also economic and environmental more vital.

The Room for the River programme started in 2005 and will cost 2,3 billion euro. The final remaining large project is the widening of the mouth of the IJssel river. This project started in 2015 and is expected to be finished by 2022.

More articles about Room for the River