With the projection of blue lights, Dutch artist Daan Roosegaarde, created a largescale virtual reality around the building of the UN headquarters, indicating how high the water would rise if no action was taken to put a halt to climate change.

In the presence of Dutch minister Sigrid Kaag for Foreign Trade and Development Cooperation, the show closed a day full of water events, organised by the Netherlands, at the UN headquarters.

The light show mimics the aurora polar light and it took place on the evening of World Water Day on 22 March.

Poetry of water
Roosegaarde’s light show created a dream landscape which shows the power and poetry of water. In line with the Sustainable Development Goals, the show aimed to raise awareness around the rising sea levels.

In the Netherlands, Roosegaarde held several light shows, mostly to raise awareness for sea level rise. The show in New York mimics the height of hurricane Sandy with wavy lines of light made with the latest LED technology, software and lenses. 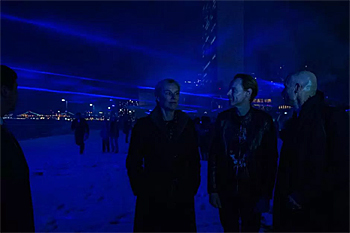 The new normal
On the occasion of the light show, Dutch special water envoy Henk Ovink reminded that ‘the Sandy's and Harvey's of this world’ will not stop. ‘On the contrary, they are the new normal, becoming more extreme year by year’, stated Ovink.

Roosegaarde not only warns against rising water levels, but also wants to inspire towards the future: ‘Can we build floating cities, how much power can we generate from the movement of water? Experience the vulnerability and the power of living with water’, the Dutch artist said.

The Waterlight show was made possible thanks to the Dutch partners in the Water sector including Arcadis, Royal Netherlands Society of Engineers (KIVI), Van Oord, Boskalis, Dutch Water Authorities and Netherlands Water Partnership (NWP).

About Daan Roosegaarde
Dutch artist and innovator Daan Roosegaarde (1979) is a creative thinker and maker of social designs which explore the relation between people, technology and space and is best known for creating landscapes of the future.

He founded Studio Roosegaarde in 2007, where he works with his team of designers and engineers towards a better future.

Roosegaarde is Young Global Leader at the World Economic Forum and featured by Forbes and Good 100 as a creative change maker.