The city of Rotterdam tops ranking as the world’s most sustainable urban water city followed by Copenhagen and Amsterdam.

This ranking results from a benchmark by consultancy firm Arcadis of 50 global cities on their water sustainability, measuring how effective they are in terms of resiliency, efficiency and quality.

Arcadis' first Sustainable Cities Water Index was released at the Adaptation Futures 2016 conference in Rotterdam on 12 May. 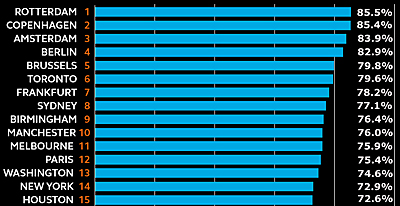 Rotterdam has the best overall score on water resiliency, efficiency and quality.

Best overall score
Of the 50 examined global cities around the world, Rotterdam, the Netherlands, has the best overall score on the aspects of resiliency, efficiency and quality.

It has the highest score on urban resiliency because of its excellent water management and robust flood protection.

The second place is for Copenhagen, Denmark, having the highest score on efficiency because of its very low leakage rate, fairly high charges per unit of water and a high incidence of water metering.

The highest score on water quality was for Toronto (Canada) mainly for having the lowest levels of water pollution at its source. 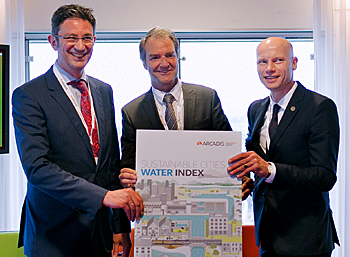 Inability to prevent floods and withstand drought
The index shows that most cities are in need of greater investment and prioritization to improve their resiliency to extreme weather events and unforeseen water shortages.

A lack of urban green space impacts the resiliency of many cities in Middle East and Asia. US cities are amongst most susceptible in developed world to higher flood risks due to natural disasters.

And the index shows inability to withstand natural disasters and water shortages hampering their sustainability.

Meanwhile, the area in which cities tend to perform best is water quality. Despite some locations having areas of challenge protecting their citizens there is little variation between most of the cities in the top half of the index.

Rising water demand
John Batten, Arcadis Global Director of Cities and Water, commented: “Water demand is rising, aquifers are being depleted and the threat of extreme weather is increasingly real, meaning that cities can be overburdened with too much water or stressed without enough."

According to Batten this report highlights the areas of opportunity for cities. "It informs decision-makers on urban water issues how they use and manage water, hopefully making them more sustainable economically, environmentally and for the benefit of their people.” 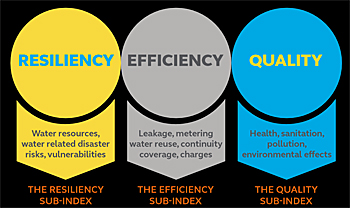 Three elements used for the index to analyse the overall water sustainability..

Long term success
The report emphasizes that there is not one single winning strategy to cities to become water proof. The index shows that all cities still have steps to take but the challenges differ from city to city.

It is important, the report says, to understand that sustainability is not only a matter of water but, rather, it is also about the social, economic and governmental challenges.

Resiliency to absorb the effects of climate change, extends to the soft infrastructure of society, including employment, income distribution, social cohesion and a range of factors not usually built into water management.

This news item was originally published on the website of Arcadis.
(top photo by Frank Hanswijk - Green Roof Festival Rotterdam)