The network of the world’s megacities, C40 Cities, announced its 25 finalists for the C40 Cities Bloomberg Philanthropies Awards 2017. The projects of these finalists represent the most ambitious and innovative efforts by mayors of the world’s greatest cities to tackle climate change.

Rotterdam is amongst these candidates in the category ‘Climate adaptation plans’ with its Roofscape project. In its category the Dutch city competes against Washington (USA), San Francisco (USA), Wuhan (China) and Hong Kong (China). 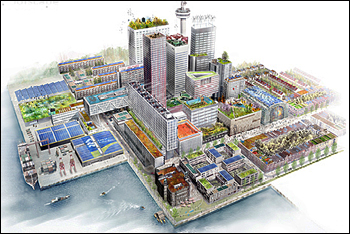 The use of roofs is seen as a way to improve the city’s liveability. For instance, green roofs improve the air quality, cool-down the city and retain rainwater.

In 2015 Rotterdam asked Dutch-based design office De Urbanisten to examine the conditions for the multifunctional use of rooftops in the city and to visualize the potential of a roofscape programme.

Now, the city stimulates owners to make more use of their roofs. 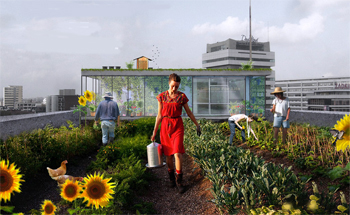 Rooftop gardening does not only cool-down the city, it also buffers rainwater to relieve the city's drainage system during heavy rainfall, preventing streets to flood.

Each category of the C40 Cities Bloomberg Philanthropies Awards 2017 will have a winner from an American city and a city from the rest of the world.

The winners of the C40 Cities Bloomberg Philanthropies Awards 2017 will be announced in Chicago, at the North American Climate Summit later this year. 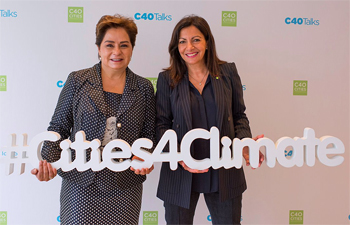 The finalists were announced at a C40 meeting in New York in the presence of Paris mayor Anne Hidalgo (right) and UNFCC-secretary Patricia Espinosa (left).

Examples for the world
‘Mayors around the world are working harder than ever to fight climate change because they understand the immediate benefits of action, and this year’s group of C40 finalists highlights the critical role cities play in speeding global progress’, said UN Special Envoy for Cities and Climate Change and C40 Board President, Michael R. Bloomberg.

Mayor of Paris and Chair of C40, Anne Hidalgo, said: ‘The urgency of the climate crisis facing the world means that we need to be constantly recognising the best ideas in how cities can tackle climate change’.

According to the mayor of Paris the nominated projects deserve to be closely studied by mayors and city leaders around the world.

Rotterdam won the C40 Cities Award in the category adaptation strategies in 2015 at the Paris climate summit.