Royal Boskalis lowest bidder for deepening Elbe up to port of Hamburg, Germany

Wassertraßen- und Schifffahrtsamt (WSA) Cuxhaven announced that Royal Boskalis submitted the lowest price in the tender for deepening the river Elbe from the North Sea to the port of Hamburg, Germany. WSA Cuxhaven will verify the commercial and technical aspects of the tender in the coming weeks.

The award of the contract will be approximately 200 million euro and is expected in the second half of January 2019. The dredging activities are due to commence in February 2019. 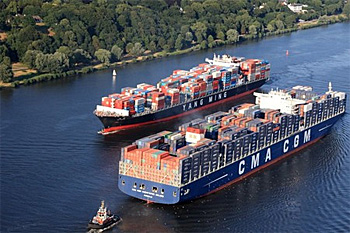 Capital dredging
The Port of Hamburg reacts positive to the recent developments to improve the access for mega containerships. The port calculated that approximately 2,800 port calls can be expected by such ultra-large ships. That is more than twice as many as present.

On average the 145 km long river section between the North Sea and the harbour will be deepened by 1 m, with more dredging expected at several shallow sections.

Passing box
The Port of Hamburg is especially pleased with the planned construction of the 7 km long passing box.

As the mega container ships have not only more depth, they are also wider and this lead to a one-way restriction between Wedel and Wittenbergen.

As part of the deepening, the fairway will be widened to 385 m section so the large ships can pass here in both directions as well.

This news item is based on an originally press release published on the website of Boskalis.