Royal Boskalis steps ahead in Oman

Dutch dredging company Royal Boskalis Westminster has received a Letter of Intent for a contract to develop the port of Duqm in Oman.

The contract will be awarded by Special Economic Zone Authority Duqm (Sezad) and has a value of approximately 480 million euro. The final award is subject to Sezad satisfying certain conditions.

The Port of Duqm is a an existing strategic dry dock and industrial free trade zone located in the Al Wusta Region between Muscat and Salalah and has been designated as a Special Economic Zone. 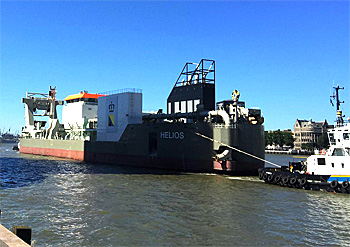 Mega cutter Helios is still under construction and is to be delivered by mid-2017. Here seen in port of Rotterdam.

Deepening of port basin
Various dredging and civil activities will be executed under the responsibility of Boskalis, including the deepening of the port basin to a depth of 18 meters.

Other activities include reclamation of new land, the construction of a quay wall with a length of one kilometer, a double berth jetty island and stone revetment.

Mega cutter
The dredging scope will be executed by the new mega cutter Helios, which will be taken into service mid-2017, and a jumbo hopper and medium-sized trailer suction hopper dredger.

Based on the current expectations, the design activities are due to commence in the coming weeks and equipment will be mobilized mid-2017. The project is expected to be completed in 2020.