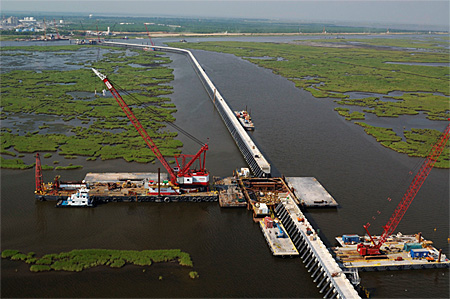 On 8 December, the engineering firm Royal Haskoning celebrated the completion of its activities for the famous Hurricane & Storm Damage Risk Reduction System program. The Dutch Consul in New Orleans, Constance Willems, was also present at the event, which was held with local partner Evans and Graves. Willems praised the company for deploying Dutch coastal defence expertise in New Orleans.

Design of IHNC surge barrier
In recent years Royal Haskoning has been involved in designing the New Orleans levee system, including construction of the Inner Harbor Navigation Canal (IHNC) barrier.

The IHNC barrier seals New Orleans off from the Gulf of Mexico when a hurricane strikes. Royal Haskoning specifically worked on the design height, wave forces, navigation and soil protection. It also advised on and gave direction to the resiliency of the design.

Forecast of hurricanes
Besides working on the IHNC, Royal Haskoning developed concepts for storm forecasting. One of these was the Storm Atlas, which was used effectively in 2008 for efficient prediction of the path of Hurricane Gustav. More recently, the tool has been extended to low intensity storms, enabling the Atlas to forecast a broader range of hurricanes.

Levee information management system
Furthermore, Royal Haskoning has contributed extensively to the system's operational aspects. It has set up various operational water control plans for the US Army Corps of Engineers. It has also devised a Levee Information Management System (LIMS) for the levee boards. LIMS contains information on the whole levee system, with a visual display function. 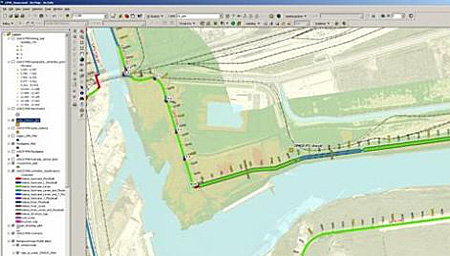 This new monitoring system helps the levee boards to plan and coordinate the opening and closure of the gates. Last hurricane season, this module was successfully applied during Tropical Storm Lee.

Giuseppe Miserendino, Director of one of the levee boards, explains “Royal Haskoning staff have a full grasp of our work and the flood protection system, which has resulted in a tailor-made solution that fully suits our needs.”

Involvement of many
Many interested visitors from the Netherlands and elsewhere came to see the works in New Orleans while the project was in progress. The project triggered students' imaginations. Marten Hillen, one of the students from Delft University of Technology and now working for Royal Haskoning, was actually awarded "student of the year," early in 2008, for his work on the project.

This press release was originally published in the website of Royal Haskoning.