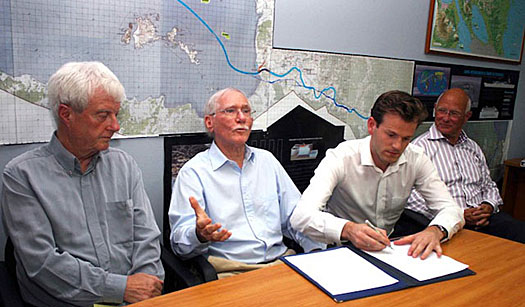 A Dutch consortium consisting of Royal HaskoningDHV and Ecorys has won a contract to conduct a pre-feasibility study into the construction of a canal through Nicaragua – all the way from the Gulf of Mexico to the Pacific Ocean.

The canal will cater for larger ships than the Panama Canal and will be Central America’s second main waterway. The contract for the study, scheduled to be completed early 2013, is worth USD 720,000.

Conceptual design
The consortium will examine the technical, financial and economic feasibility of building the canal, with special attention to water management and environmental impact. The study embraces such matters as the required dredging, the conceptual design of the canal and locks and opportunities for ecological offsetting.

The Nicaraguan government estimates that the project will cost USD 20 billion and the consortium has been asked to verify this figure.

Biggest container ships
On completion of its current expansion the Panama Canal will be able to handle ships with a carrying capacity of between 120,000 and 130,000 DWT. However, a growing proportion of the global fleet is made up of even larger ships, including the biggest container ships in the industry, large bulk carriers and oil tankers. Nicaragua plans to build a canal to serve this part of the market, where carrying capacities range from 200,000 to 250,000 DWT.

On border with Costa Rica
Plans call for the canal to be located at the border of Costa Rica and Nicaragua. Subjects the consortium will study include how the ground needs to be dredged, what environmental impacts will occur and how all of this will affect water management.

Several routes have been examined in the past. This new study will focus on a route that largely follows the course of the San Juan River in southern Nicaragua. The definitive route will be selected on completion of the study.

The Nicaraguan government has defined three key objectives for the project: