The world’s second ‘sand engine’ will be located on the East Anglian coast to protect Bacton Gas Terminal and nearby communities from coastal erosion.

North Norfolk District Council, Perenco UK and Shell UK have signed an agreement on 7 September, to mark the official launch of the Bacton to Walcott scheme.

Dutch consultancy firm Royal HaskoningDHV is still working on the details of the scheme, but it has been decided that the coastal enforcement will be based on the long-term solution of sandscaping.

In this scheme 1.5 million cubic metres of sand will be placed along the coast to protect a 5 km stretch of the UK’s east coast including the nationally critical Bacton Gas Terminal (operated by Shell and Perenco) together with its neighbouring communities. 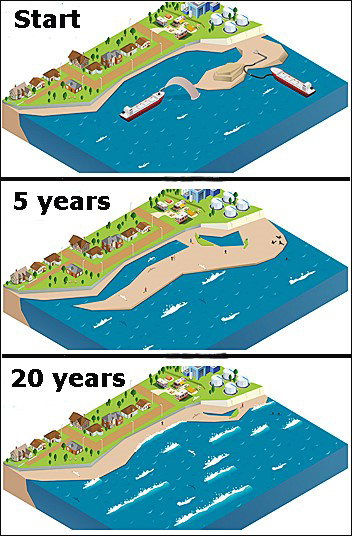 First phase is the construction of an artificial peninsula. Wind, tide and waves disperse the sand along the coast and the peninsula will eventually disappear.

The first sand engine in the Netherlands was introduced in 2011 as an effective soft coastal management solution making use of natural processes.

The method entails placing a large volume of sediment in a single location and designing it so that natural processes move the sediment to areas down the coast where it is needed to stop the erosion.

Royal HaskoningDHV was heavily involved in the design of the original Dutch concept, as well as delivering the Environmental Impact Assessment (EIA).

The Bacton project is the first time the concept will be applied abroad.

Exciting project
John Lee, NNDC cabinet member for coastal management said: ‘This is a ‘once in a lifetime’ opportunity to bolster sea defences at Bacton Gas Terminal and protect the villages of Bacton and Walcott – and this is the only viable way to strengthen our sea defences here. It’s an exciting project which shows the benefit of the public and private sectors working together.’

Jaap Flikweert, Flood Resilience Leading Professional at Royal HaskoningDHV added: “In the Sandscaping initiative we are working with British partners to translate the Dutch sand engine to the very different context of the UK. It is all about using the natural energy of the sea to distribute the sand, and this can make sandy solutions affordable.’ 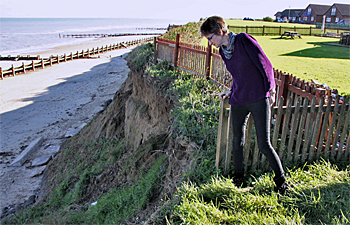 Closer to the coast
According to Flikweert sandscaping has proven a very cost-effective method as ‘any other solution would not have been affordable’. He expects that, just as in the Netherlands, the costs per cubic meter will be half the prices compared to conventional beach nourishment.

The design of the British ‘sand engine’ differs on several aspects from its bigger Dutch bother.

Flikweert: ‘The East Anglian coast has a different profile, with different waves and tides’, explained Flikweert. ‘In this situation it is better to keep the initial artificial peninsula much closer to the coast. This also avoids placement on protected seabed habitat and limits offshore losses of sand. 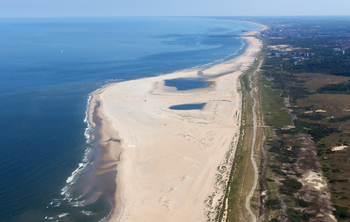 The 21,5 million m3 sand engine on the Dutch coast in July this year.

The scheme aims to maintain the required beach levels for the next fifty years. ‘We expect the dispersion of the current 1.5 million cubic metres to last for 15 to 20 years. So it is anticipated that later more beach nourishments will be needed.’

The monitoring of the Sand Engine in the Netherlands, has shown that the dispersions can be slower than the models suggest. According to Flikweert the possible impacts of a possible slower dispersion have already been included in the decision making . ‘A weakened sea wall near one of the villages needs to be stabilised urgently. There is not enough time left for the sand to arrive by the natural sandscaping. Therefore a small additional classic beach nourishment has been included in the scheme.’

The construction of the beach nourishment is expected to begin in summer 2018.

Presentation of the Bacton and Walcott Coastal Management scheme, explaning the sandscaping concept.

Drone video of the coastline today and the anticipated situation after the sandscaping.