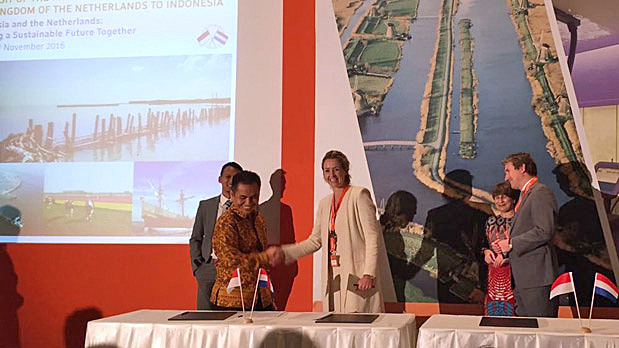 The signing took place on 23 November in Jakarta as part of the trade mission to Indonesia with Dutch Prime Minister Rutte, Ministers Schultz van Haegen and Ploumen and State Secretary Dijksma. 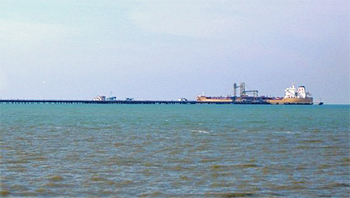 Current situation at Kuala Tanjung, north Sumatra, where one of Indonesia's 24 new ports is projected.

New strategic ports
Kuala Tanjung is one of the 24 strategic commercial ports to be developed under President Joko Widodo’s maritime highway vision.

Located on the international shipping lane of the Malacca Strait, Kuala Tanjung Port will be integrated with a nearby existing port and Special Economic Zones.

Urban water challenges
The mission will also address Jakarta’s integrated coastal development. Because of groundwater extraction parts of Jakarta are sinking some 10 centimetres per year.

This constitutes a danger for some four to five million people in North Jakarta who in many places are only protected by a little wall.

Royal HaskoningDHV Indonesia Resident Director Berte Simons: "Since the Indonesian government asked the Dutch government for assistance in 2007, the Dutch water sector is contributing to a lasting solution to sustainable water management of the city."

No small task
According to Simons this is not a small task. “Space is scarce, stakeholder interests are large and government budgets limited. We are proud to contribute to the National Capital Integrated Coastal Development (NCICD) strategy that not only should be a sanitation, water supply, civil and hydraulic engineering feat but also one in which inclusive urban and socio-economic solutions are key.” 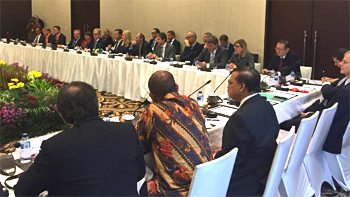 During the Summit, CEOs and government members of both countries discussed practical solutions to bottle-necks in the implementation of projects where Dutch companies together with local partners are involved.

The Summit served as a review of the progress since the visit of President Joko Widodo and his team to the Netherlands in April 2016.