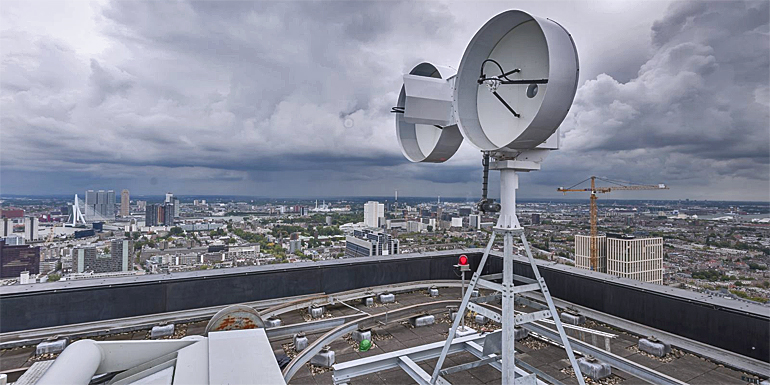 A special team led by Dutch-based consultancy firm Royal HaskoningDHV, has been assigned by local municipal and provincial authorities to translate the data collected by a rain radar in Rotterdam into a more accurate forecasting for end users, such as operators of pumping stations and rain water drainage systems.

The dual-polarization X-band radar was installed on the roof of a sky scraper in the city centre of Rotterdam in 2015 as part of an EU-funded project, RainGain (see on top photo).

Delft university of technology and ICT-firm SkyEcho are currently developing specific software to transform the radar signals into rainfall. New instruments and software will be tested during an intensive monitoring campaign in the Rotterdam region this summer. 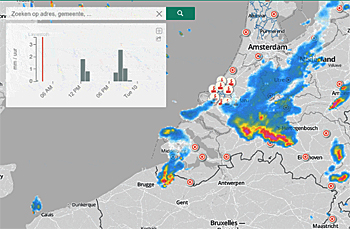 Detailled mapping of cluster showers in the Rotterdam region.

Proactive water management
The Smart water team is assigned to improve the accessibility of data gathered by the city’s Rain Radar, enabling end-users such as traffic information systems and pumping stations to response proactively to extreme weather events.

A high volume of data has already been gathered by the radar but a client consortium of the City of Rotterdam, three local water authorities and the province of Zuid-Holland has taken the next step by engaging a team, led by Royal HaskoningDHV and including experts from Nelen & Schuurmans and Infoplaza.

Hanneke Schuurmans, project manager for Royal HaskoningDHV said, “Rotterdam is leading the way in the creation of climate resilient cities. We will work in close corporation with SkyEcho and TU Delft, who are developing specific software to transform the radar signal into rainfall intensities.” 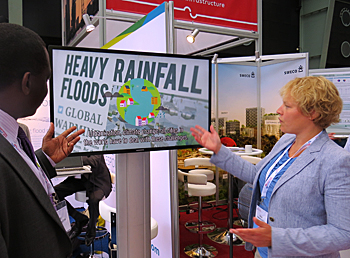 Hanneke Schuurmans of Royal HaskoningDHV at the Adaptation Future conference in 2016 in Rotterdam.

Combination of radars
“We will combine this data with data from six other radars and use this to develop forecasts”, Schuurmans continues. “As a result we will improve our current rainfall images by a factor of 100, making forecasting 100 times more accurate.”

“These improvements will result in a wealth of applications designed to improve the resilience of city services from control of pumping stations and storm water collection to traffic management during extreme rainfall.”

Embracing available technology
Johan Verlinde, Asset Manager Water, City of Rotterdam said: “Rotterdam is proud to be recognised as one of the world’s leading resilient cities but as climate continues to change and our city continues to grow, we must embrace the available technology to ensure that our infrastructure and residents are better prepared to adjust to those changes.”

Royal HaskoningDHV has extensive experience in the creation of smart water solutions having recently delivered a high profile Flash Flood Forecasting app to the citizens of Ghana and are currently working on a Flood Information System for Parramatta Sydney (Australia).

Work on the Rotterdam project started in April and is expected to run for two years. The team expects initial work will be complete by June, allowing the system to catch the intense rainfall events that mostly occur in the summer months.