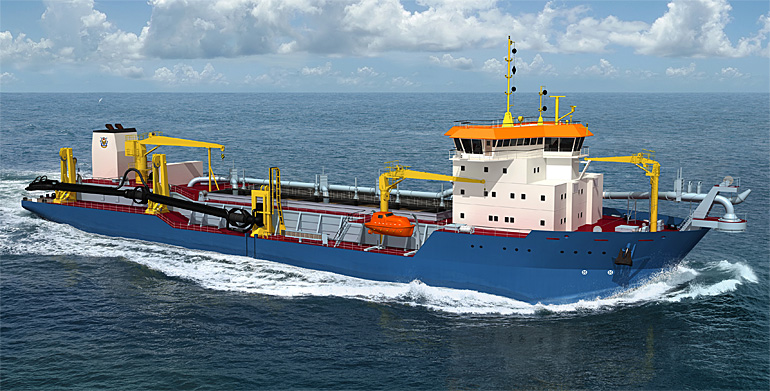 Royal IHC (IHC) and National Marine Dredging Company (NMDC) have signed a contract for the construction of the first custom-build state-of-the-art trailing suction hopper dredger (TSHD) in the Gulf area.

The hopper (see impression above) will have a capacity to handle 6,000 cubic meter of dredging material per hour and will form a part of NMDC’s international growth and fleet investment strategy. 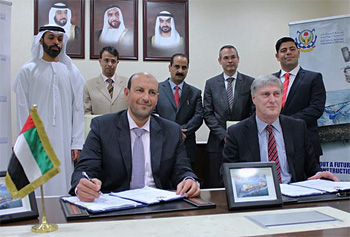 Highly manoeuvrable
"We are proud to contribute to NMDC’s growth strategy and value the long-term relationship with our customer,” says Bram Roelse. "Our successful cooperation goes back many years and has already resulted in the delivery of over 10 vessels.”

The design is the result of close cooperation between IHC and NMDC. It is a tailor-made solution that combines shallow draft and a large dredging depth with high manoeuvrability, and was specifically designed for operating in high temperatures.

Therefore, the order also includes a full life-cycle support program in combination with condition-based monitoring, which ensures the long and sustainable operation of the vessel. IHC will also provide training for NMDC’s crew.

Second contract in short time
The new order follows a large order by Belgian dredging company DEME in February. Royal IHC was contracted by DEME for the design, construction and delivery of a 15,000 m3 trailing suction hopper dredger.

This hopper, named Bonny River, will be supplied with an extended suction pipe, and an additional suction pipe with heavy-duty rock draghead, enabling the vessel to operate in hard soil areas.

This news items was originally published on the website of Royal IHC.