A ceremony to celebrate the on-time completion was held before the TSHD vessel set off for Guangzhou, China where she will be handed over to CCCC Guangzhou Dredging Company.

Jun Yang 1 has a hopper capacity to handle 21,393 cubic meter of dredging material. It is expected to arrive at her homeport in China at the end of September 2016. 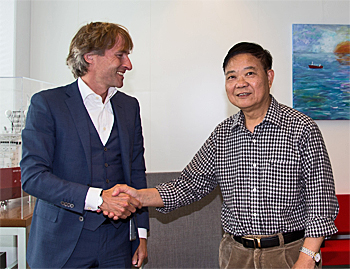 Largest Chinese hopper dredger
"IHC is proud to have completed this flagship for our customer," said COO Alexander van Noort at IHC. "The excellent cooperation between CCCC GDC and the IHC project team has resulted in the delivery of the largest TSHD in China.

It is the 21st vessel designed, constructed and delivered by IHC, or in close cooperation with Chinese ship yards, for CCCC GDC over the last 40 years.

Deputy Chief Engineer Mr Luo Rijia at CCCC GDC said: "The new vessel will enable us to carry out capital dredging and land reclamation projects on the domestic and international markets in an efficient way."

The course was specially designed for the dredging process by IHC so the crew could learn about the functioning and handling of the various systems on board, such as the highly advanced dynamic positioning/dynamic tracking (DP/DT) system.

This news item was originally published on the website of Royal IHC.

Launch of the TSHD Jun Yang 1 on 19 December 2015 at IHC Dredgers shipyard in Kinderdijk, the Netherlands. The ceremony was performed by Ms. Li Wen Ci, the wife of the ambassador of the People's Republic of China in the Netherlands.