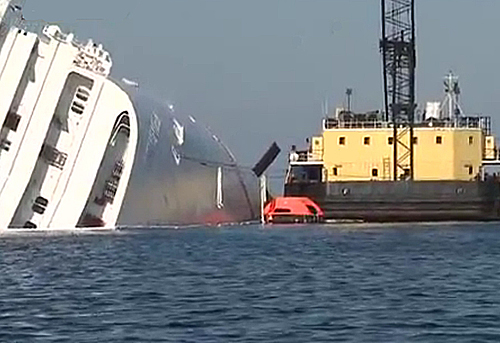 The last oil is pumped from the cruise ship Costa Concordia. On The morning of March 24, at 07.30 CET, SMIT Salvage successfully completed its assignment on the removal of fuel from the Costa Concordia.

Over the last couple of days, the SMIT Salvage diving team was transferring heavy fuel oil from the last settling tank in the engine room. These last tanks were completed, closed and sealed off.

Smit Salavage will retain a small diving team and a diving foreman on the island under a so-called ‘caretaker contract’. The team will remain standby for designated emergency duties until a contractor is appointed for the removal of the entire ship

In mid-January the Costa Concordia capsized when it was too close to the coast of the Italian island.

Measurements have shown that the water around the ship is not polluted.

The threath of an environmental disaster off the coast of Italy is over. This said mayor Sergio Ortelli of the island of Giglio on March 22.The mayor expects that the salvage of the 290-meter Costa Concordia will take ten to twelve months.