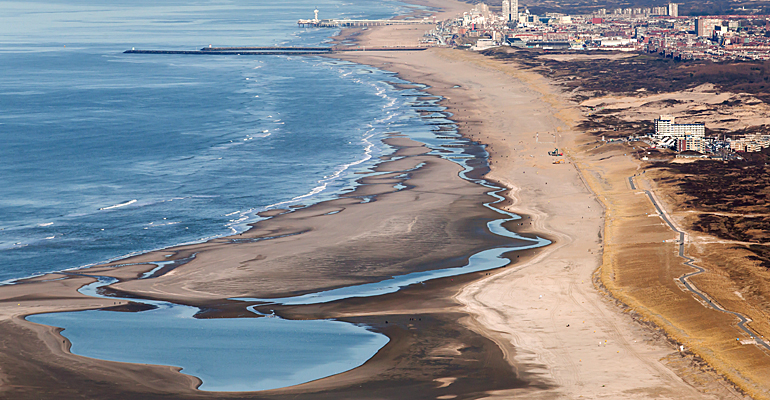 The artificial peninsula on the Dutch coast, the Sand Motor, has gradually spread 2.5 million cubic meter sand. Wind, tide and currents reshaped the sand body making it 260 metres narrower and 2.2 kilometres longer. Over a length of 2.5 kilometers the Dutch coastline has moved seawards and the Sand motor is already supplying sand to the coast over a stretch of 5 kilometers.

This means the Sand Motor is performing the way it was designed for: a big one-time long-lasting intervention as an alternative for many small coastal nourishments.

The outcomes on the reshaping of the Sand Motor were presented on a special international conference in the Hague, the Netherlands on 14 September on occasion of celebrating these first five years. 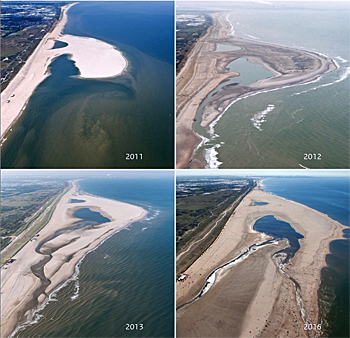 Top left the peninsula as it was construction in 2011 with a dune lake and a lagoon. Bottom right as had reshaped by Augustus this year.

Longer life time
In 2011 some 20 million cubic meters of sand was put in place to form the peninsula. In its first year, the sand body changed shape in line with the expected pattern based on model calculations in the design phase. In the following years the sand transport has been slower than expected (on top photo the 5 km affected coast line almost upto the city of The Hague, top right).

On this basis, it is legitimate to conclude that the Sand Motor will continue to nourish the Dutch coastline well beyond twenty years.

Next five years
According to the national water authority Rijkswaterstaat, who contracted the construction of the peninsula, the sand body has not yet been in place long enough for a solid scientific evaluation.

The extensive monitoring of the morphology, hydrology, ecology, governmental issues and recreational use, will continue to 2021 to provide a better understanding of how the sand transport works.

By 2021 the Dutch government will make up its mind on more Sand Motors along the Dutch coast. During the conference a map was shown, indicating that at least at two other locations the concept could work. 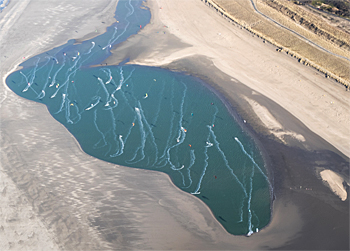 The lagoon is an immense popular location for kite surfers.

Limited dune growth so far
The Sand Motor is closely monitored and surprisingly the dune growth has been slower than expected. This can be explained by the fact that the sand has to travel a relatively large distance to the dunes and first has to cross the lagoon and the dune lake. Both have captured a lot of sand in the last five years.

The dunes are expected to form faster as soon as the lagoon and the dune lake have filled up more with sand.

More biodiversity
The lagoon has added a new habitat to the South Holland coast, with more different benthic species, an important source of food for birds.

The number of plant species and locations where they grow is increasing. They include characteristic sand couch and marram grasses, which are protected by international agreements signed by the Netherlands.

A particularly striking development is the abundance of aquatic plants in the dune lake itself.

Multipurpose design
The conference made clear that after five years it can be concluded that the design of the Sand Motor meets the expectation that coastal defence, nature and recreation can be combined.

The multifunctional design of a large 128 ha land mass above sea level with a dune lake and a lagoon made the area popular amongst tourists. Not so much for bathing but the extended beach has become very popular for walking and kite surfing. 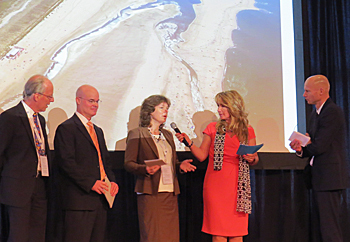 International perspective
During the conference there was much attention for the construction of Sand Motors on other locations outside the Netherlands. Speakers from Italy, Sweden, Jamaica and the USA praised the Sand Motor as an inspirational concept, as a template.

The interantional experts warned that this first Sand Motor in the Netherlands cannot be copied. The circumstances along the Dutch coast are unique, such as the almost unlimited availability of sand.

Studies at many locations in the world learned that in many cases the feasibility depends on its multipurpose design. A Sand Motor in itself, as an alternative for traditional coast nourishment, does not make an interesting business case.

In combination with other functions, such as the creation of additional land and recreational functions, the concept was considered very feasible. 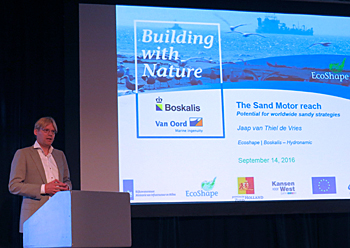 "Such a strategy allows the involvement of other stakeholders, next to the authorities that are responsible for the coastal maintenance and constructions", he explained.

"Many well-known tropical beaches such as the Australian Gold coast, the Hawaiian Waikiki beach and the Brazilian Copacabana beach, are in urgent need of an upgrade. At such hotspots a one dollar investment in a concept like the Sand Motor, can easily generate over 1000 dollar of benefits", Van Thiele de Vries claimed.

The difficult part is getting all the stakeholders around the table, he added.

A 15 minute report on the extensive monitoring of the behaviour of the Sand Motor: