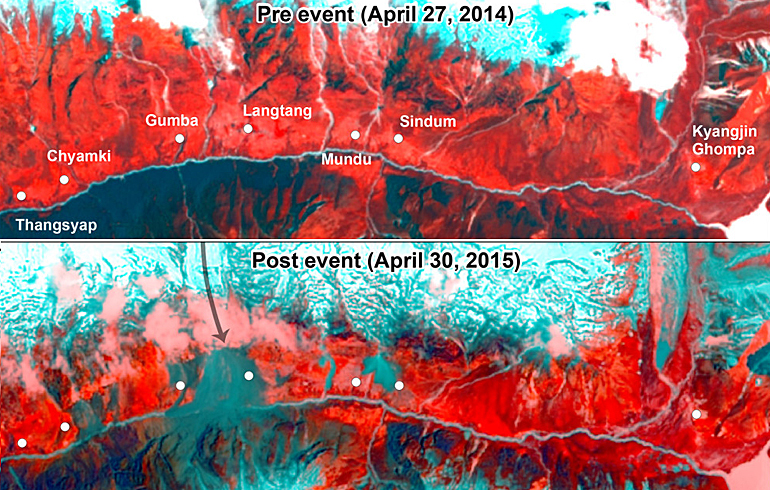 Dutch scientists Walter Immerzeel and Philip Kraaijenbrink of the Utrecht University analysed recent satellite images of the Langtang Valley in Nepal and compared the new imagery with pre-earthquake imagery from a year earlier.

The researchers concluded that the valley is vulnerable to secondary events, such as mudslides and ice avalanches.

The two Dutch scientists are part of a specially formed group of 35 volunteers led by University of Arizona, USA. The group will systematically investigate the entire quake-affected area using remote sensing. 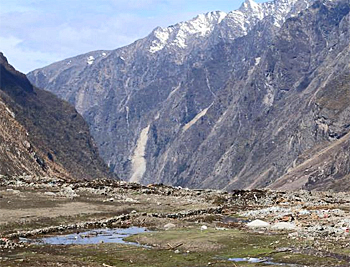 Photo provided by Nepal Army on 1 May, shows the Langtang Valley covered with rubble from mudslides.

First cloud-free images
A strong (7.8) earthquake hit Nepal on 25 April 2015. Initially Landsat-8 satellite observations were obscured by clouds, but on April 30, the satellite acquired the first largely cloud-free image of the Langtang river valley, north of the capital of Kathmandu.

The analysis by Walter Immerzeel and Philip Kraaijenbrink revealed the true extent of the disaster that took place in the Langtang valley.

Langtang village was completely buried by a very large avalanche that originated from the glacier and snowfields on the northwestern slopes above the village.

Large landslides or avalanches are also observed near the villages of Chyamki, Gumba, Mundu and Sindum. The avalanches reach to the margins of those villages.

According to the group's first report, the extent of the damage around these small settlements will require further investigation using higher resolution imagery to be obtained from satellites, and word from relief crews on the ground. The area around Kyanjin Gompa seems to be relatively intact.

River blocked
The river at the Langtang village avalanche appears to be blocked, but there is no evidence yet of a lake forming behind the blockage. This may indicate that the water has found its way through the debris, snow and ice.

The scientists believe the valley is vulnerable to secondary events such as mudslides and debris and ice avalanches. This situation could continue into the coming monsoon.

Both scientists have been involved in glaciological studies in this region, using data collected with unmanned aerial vehicles (UAV).

This news item is based on publications on the websites Mountain hydrology and Landsat Image Gallery.