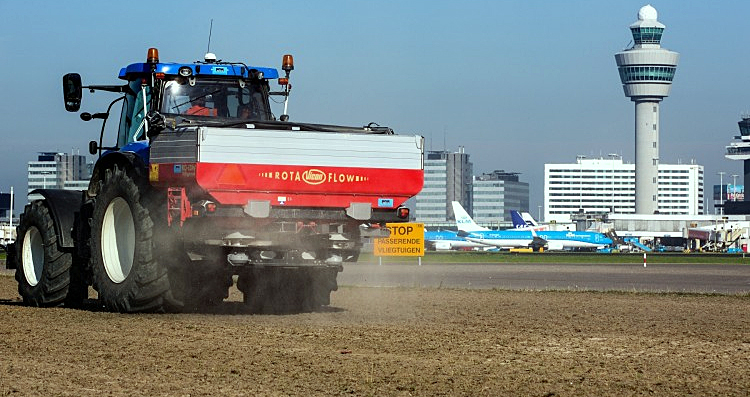 Last week Schiphol Airport spread fertilizer granules on its grassland that were recovered from wastewater from the toilets from airplanes.

The wastewater has been treated in a pilot struvite reactor at the airport's wastewater treatment plant (wwtp) that is operated by Evides Industrial Water. 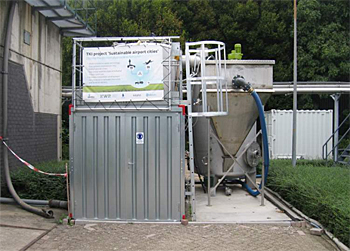 Permanent struvite reactor
Given the low concentrations of pathogens measured, researchers on the pilot project have concluded that the application is feasible.

Evides Industrial Water will now investigate the option to include a permanent struvite reactor as part of the planned revision of the wwtp to increase its capacity.

Safe use
KWR has analysed the struvite granules on its composition, contamination with pathogens and micro-contaminants. According to its researchers the measured levels of indicators for pathogens are low measured.

About a quarter of the waste water at Schiphol comes from the airplanes. Theoretically all waste water at the airport's wwtp allows a phosphate recovery up to 100 kg struvite daily as dry mass.

Most efficient phosphate removal
The remaining question is the feasibility of a continuous process to produce the struvite and possibility to remove 85 percent of the phosphate efficiently.

This relates to the cost-saving benefits of the production of struvite as integrated part of the whole waste water treatment process and the reduction of the iron consumption and disposal of chemical sludge (iron phosphate). 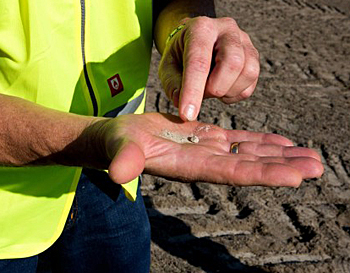 Keeping birds away
The struvite granules provide the grass at the airport a more healthy condition. An additional benefit is that it keeps the birds away. More grass means less bare soil, making it the birds more difficult to find worms.

The struvite recovery project is part of the TKI Water Technology programme to promote innovation, resulting in a shorter time-to-market for commercial applications and less costs for water users.

This news item was originally published on the websites of Schiphol Airport, Evides industrial water and KWR research institute (in Dutch only).