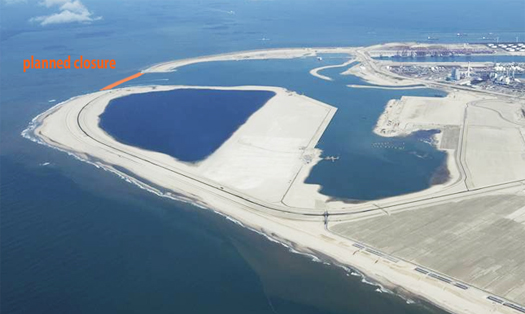 At slack water, on July 11th, the gap in the seawall of the Maasvlakte 2 is closed. Three dredging vessels of Van Oord and Boskalis worked together to link the northern and southern sections of the outer contour of the new constructed part of the Rotterdam habour in the North Sea.

Her Majesty the Queen gave the starting signal for the closure on 11 July.

For the construction of the new harbour, up to now, around 215 million cubic metres of sand have been sprayed on. The seawall is complete, apart from the closure gap. To the north and north-west lies the 3.5 km long hard seawall, consisting of a stony dune and a block dam. This was finished in February 2012.

Connection between hard and soft sea wall
The structure is unique in the Netherlands, due to the combination of stony dune and block dam, for which almost 20,000 blocks of concrete from the seawall of the existing Maasvlakte were recycled.

The soft seawall in the west and south-west is 7.5 km long and consists of a beach with 14 metre high dunes. In 2011, the whole length of the dunes was planted with marram grass.

The closure took place in phases. In May, the trailing suction dredger Prins der Nederlanden began rainbowing operations near to the closure gap. Bulldozers, cranes and shovels are being used to get the sand into the right profile.

Raising a sand bar in the gap
In the gap in the outer contour, a bar was been applied crosswise at – 8 m New Amsterdam Water Level (NAP) and later raised to -1.5 m NAP.

Final closure of the gap
If the seawall is closed around the time of slack water, one trailing suction dredger and the suction cutter dredger Edax, which is temporarily ‘trapped’ in Maasvlakte 2, will continue to apply sand in the planned dune profile.

The whole seawall will be at the right height and width by mid-August.

This news item (with video) was originally published in the website of Maasvlakte 2/Port of Rotterdam.