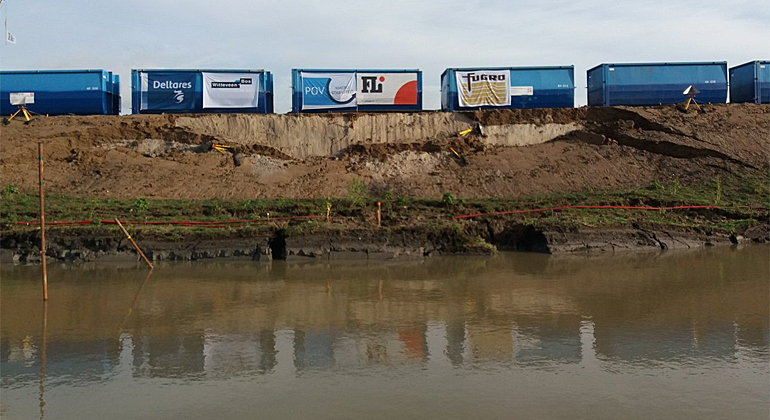 The levee at test location Eemdijk, the Netherlands, collapsed in the morning of 30 January. Step by step the ground water level inside the levee had been raised and it finally slided due to macro-instability.

The stability test was the first from a series of three. This first test levee was to provide reference data for the next final test with a sheet pile enforced levee that started this week.

The field test data will be used to improve design models for levees and are expected to make levee upgrade projects better and cheaper. 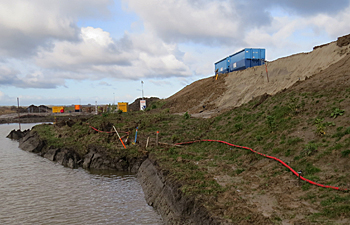 The first test levee was without sheet piles and its slide generated field test data that can be used as reference for the final test.

Cheaper strengthening of levees
The series of levee stability tests is part of the national Flood protection programme (HWBP) that includes research projects to develop new and less expensive levee strengthening techniques. New insights due to these stability tests are expected to show that the currently used piling is stronger than was assumed in the past.

This will allow to optimise the thickness of the sheet piling and the type used on individual projects and may allow less expensive sheet piles.

Large amount of data
On the test location two 60 metres long sand-clay levees have been constructed. One of which has now slided off as it was destabilized (see on top photo).

The test was closely monitored from both inside as well as from the outside of levee. So researchers were able to collect large amount of data on the real strength of the levee. 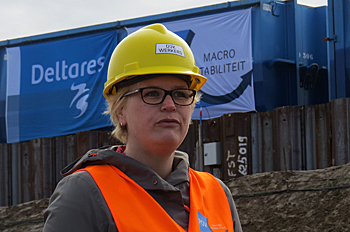 Carefully balanced design
‘We carefully balanced the design of the test levee’, explains coordinator Goaitske de Vries of regional water authority Hollands Noorderkwartier. ‘We wanted to build a realistic levee. Not too weak, so it could slide during its construction, but at the same time not so strong that we could not get it down.’

Final test
A second test levee is now ready for the final test. It has been strengthened with sheet piles over the full lenght of 60 metres, and it will be destabilized by increasing the internal ground water level and by digging a ditch at its toe.

This final test will reveal the real strength of the enforcement with the steel sheet piles.

The 7.4 billion euro programme must be completed by 2028.

This news item is based on a publication on the website POV Macrostabiliteit (in Dutch only).

Time lapse and video on the collapse of the first test levee at Eemsdijk, the Netherlands on 30 January