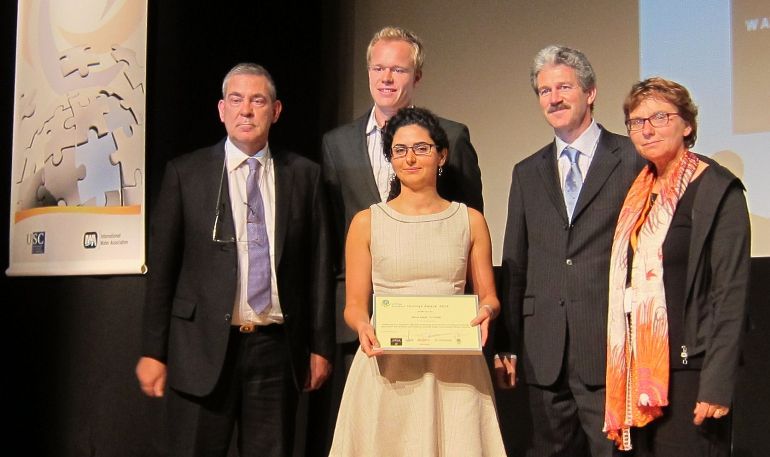 The winner of the Lettinga Award 2013, a prize of 25,000 euro, has been announced: Shiva Salek, PhD student from TU Delft, with her project proposal to produce biocement and fertilizer during the anaerobic digestion process. By using alkaline silicate minerals it should be possible to capture the CO2 in the biogas. This enriches the biogas so it can be used as 'green' gas.

The winner of the Lettinga Award 2013 was announced at the very successful 13th World Congress on Anaerobic Digestion, that took place 25 - 28 June in Santiago De Compostela in Spain.

High quality biogas and cement
Salek's project will evaluate the impact on the biogas composition and value, as well as the cement quality. The economical values received from production of these  materials can further rationalize the costs of CO2 sequestration for climate change mitigation purposes.

The use of minerals in anaerobic digestion seems promising. Other research groups are also exploring its potential.

From many applications that met the criteria, the jury unanimously selected one winner. The winning proposal was described by some of the judges as: "An elegant combination of anaerobic sludge treatment, biobased product and green gas quality".

Also, it was described as "A very bold proposal; as bold as Gatze Lettinga approached his research topics in the past. This was the only proposal using anaerobic digestion to produce bio-based products, and not even simple organic building blocks or bio-fuels, but for society crucial inorganic chemicals like cement and fertilizers, while simultaneously also developing a very interesting CO2 sequestration technology. The latter will further contribute to the carbon-foot-print reduction which anaerobic digestion already provides so strongly. The proposal crosses the existing research borders of anaerobic digestion, for which the applicants should be complimented and should receive support. If successful; many research groups will follow in their  footsteps. The proposal is a small project, with potentially large implications.”

Breakthrough innovation
The Lettinga Award was initiated in 2001 and is granted every three years. The focus of the call for 2013 was on Breakthrough Innovation in Anaerobic Technology.

The award committee called for innovative approaches, putting anaerobic digestion technologies in the core of the foreseen sustainable society. The following sponsors were fully convinced of the potential of AD technologies in this development and decided to support the fifth Lettinga Award: Paques, Nijhuis Water Technology, Waterleau, Veolia Water – Biothane and LeAF.

Read more about the research on CO2 sequestration at the Delft University of Technology.

This news item was originally published on the website of the Lettinga Award.