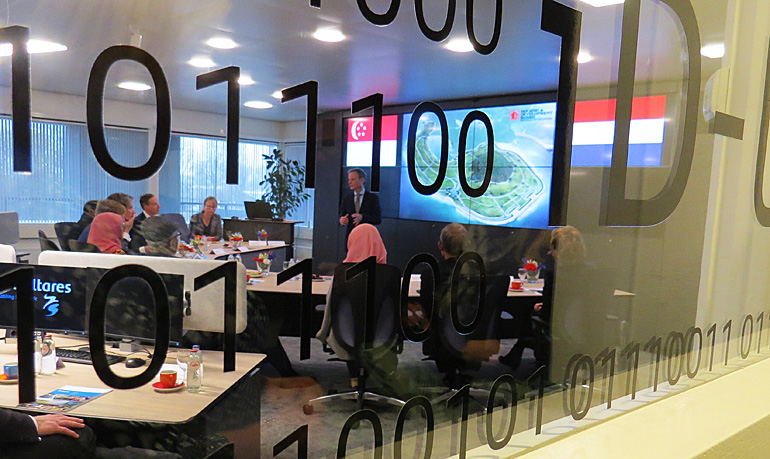 At the iD-Lab shewas briefed by senior researcher Marjolijn Haasnoot on the latest predictions of sea level rise and the consequences for Singapore.

Haasnoot told that her institute is now studying the options for additional sea defence measures in The Netherlands as predictions indicate sea level rise may occure faster. 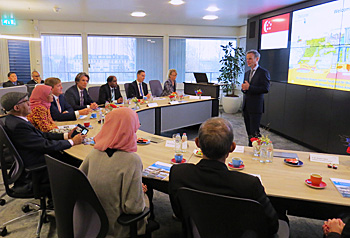 Faster sea level rise
According to Haasnoot, new insights on melting of land ice on the Antarctic cause a growing concern, as sea level rise may be on a faster pace than current models indicate.

In case of a faster sea level rise, she explained to the Singapore president, sea defence measures will last less longer and new, higher, defences are needed quicker.

Or, as an alternative, measures will have to be bigger to span a longer period of sea level rise, Haasnoot told.

In the case of Singapore much of the mainland is high enough, but Singapore will notice that sand for beach reinforcement will become even more scare than it now already is, she warned.

The president was shown a visualisation of the Aqua Monitor that illustrated the changing of Singapore's contour over the last 30 years. The island state grew over 30 percent because of land reclamations. 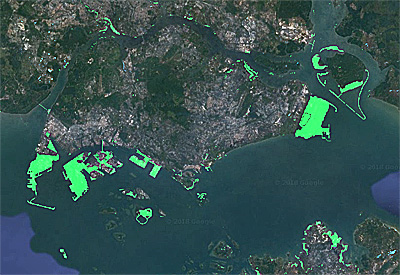 A screenshot of the Aqua Monitor showing the changes in surface water over the past 30 years worldwide. Here seen Singapore with in green the land reclamation areas.

First Singapore polder
The shortage of sand was one of the main reasons for Singapore to step down from more its classical land reclamation and start to built its first polder.

CEO Maarten Smits of Deltares reminded the president of the involvement of his institute in the initial decision making for this new type of land development for Singapore.

Deltares has ever since been, and still is, a thrusted advisor to the Singapore government for the construction of the 810 hectare polder near Pulau Tekong that started earlier this year and is scheduled to be ready by 2020.

The levee and the polder will be equipped with state-of-the-art measuring equipment, both for short-term early warning as well as monitoring long term developments. 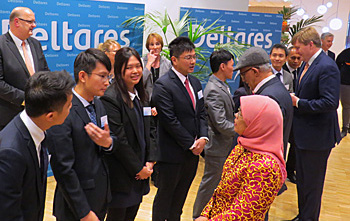 Speed course polder management
At the end of her visit president Yacob met a group of Singapore employees of the governmental agencies involved in the construction of the polder.

Deltares provides short courses for the employees over in the Netherlands to become familiar with the management of land that lies below sea level.

The courses include visits to Dutch regional water authorities that have hundreds of years of experience in polder management.

The Singapore agencies involved, are the Housing and Development Board (HDB), Public Utilities Board (PUB) and Building and Construction Authority (BCA).