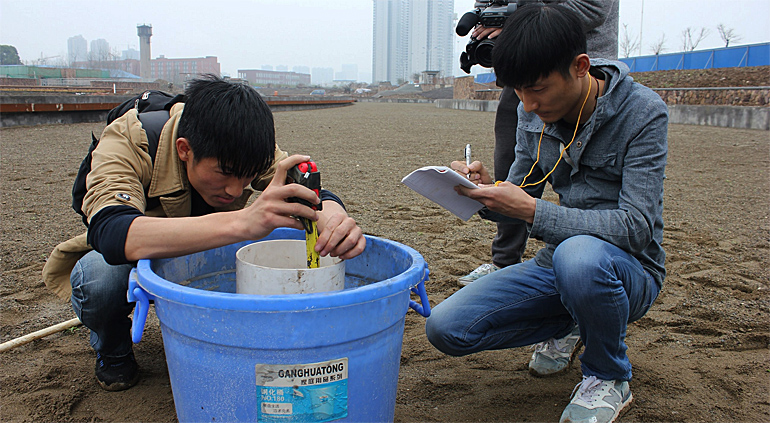 On 23 September the Jing Nan wetland park in Deyang, China, opened its doors to the public.

Design, development and realization of the multipurpose park was provided by a consortium of Chinese and Dutch public and private organisations. 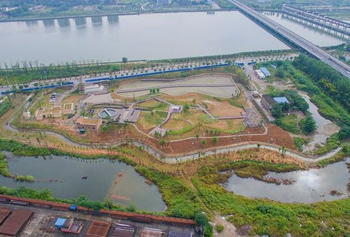 Aerial view of Jing Nan wetland park in Deyang, China, next to the Mianyuan river.

Pre-treatment of river water
Every day 3 million liters water is pumped from the nearby Mianyuan river is pumped into the park for pre-treatment. The water percolates through a specially designed infiltration zone that forms a natural barrier for bacteria and viruses.

The pre-treated water is then transported for post-treatment to the nearby city's drinking water supply station.

This system builds on the experiences of the water utility Waternet of Amsterdam, the Netherlands, that draws two third of its water from the Rhine river.

Removal of pathogens
Since the 1950's Dutch water utility Waternet uses the nearby dunes along the Dutch coast, to infiltrate the river water as a pre-treatment for drinking water for the city of Amsterdam.

Today Waternet infiltrates 65 million m3 per year in a system of ponds in the dunes that have been designed in such a way that the river water has a minimum travel time of 60 days to remove pathogens.

During its stay underground also organic micro-compounds are broken down. 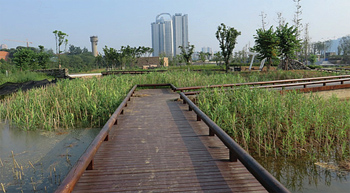 Growing water demand
In the city of Deyang, China, the water supply system can't meet the city's rapidly growing water demand. Deyang is not the only city with this problem. Currently, two-thirds of all Chinese cities don't have sufficient water the whole year round.

On top of that cities suffer from severe water pollution caused by rapid development.

Multifunctional design
The artificial groundwater discharge system in Deyang has been integrated in the design of a wetland and a park.

A Chinese landscape design company was hired to make an engineering design of the integrated wetland park with pilot components. 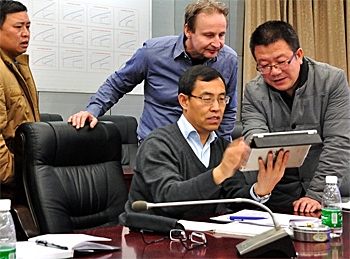 Kees van der Lugt of Waternet (top middle) and his colleagues in Deyang discussing the design of the artificial groundwater discharge system.

The whole water system, from intake to effluent, is constantly monitored by a series of automated instruments on parameters including EC, turbidity, temperature, and dissolved oxygen.

The system can be switched off whenever the water quality doesn’t meet the standard. Furthermore, water levels in Mianyuan river, recharge ponds, and six observation wells are continuously monitored. These data are important to understand the dynamics of the water system and can be used to optimise the operation of the system.

The project was funded by the Partners for Water programme of the Dutch government and by the municipality of Deyang.

Report by Deyang broadcasting news on Jing Nan wetland park (in Chinese, with Dutch subtitles only).