SIWW 2018: A look back on an inspiring dialogue to close the loop 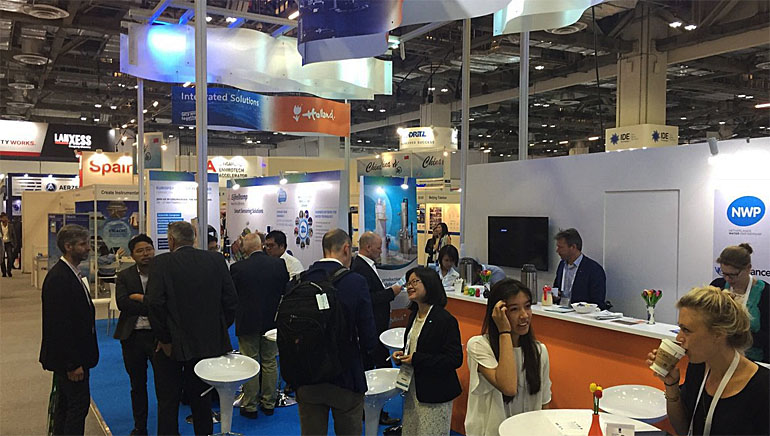 City solutions and zero waste were the buzz words at the eight edition of the Singapore International Water Week (SIWW), held at the Sands Expo and Convention Centre, Marina Bay Sands from 8 - 12 July.

The event was held in conjunction with the 6th World Cities Summit and the 4th CleanEnviro Summit Singapore, attracting over 20,000 delegates from over 100 countries.

This year’s Dutch contribution had a focus on circular economy. In many panel sessions and presentations Dutch experts expressed their views on how to close the loop of resources, including water. 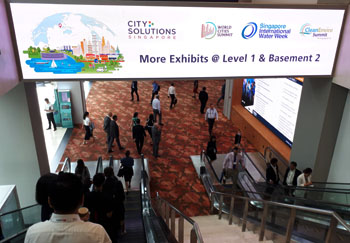 Three events at the same time, on water, on cities and on clean technologies.

Better life for citizens
Many city leaders had come to Singapore to attend the combined events. At the closing of the Water Leaders Summit minister Lawrence Wong for National Development and Second Minister for Finance, summarised their presence and the many fruitful conversations on city solutions.

‘There have been many good ideas thrown up during our conversations with city leaders – about disruptive innovation, and infrastructure’, minister Wong said.

‘But many also related it back to an important point, which is underpinning everything we do – and that is the ultimate objective of wanting to make life better and happier for our citizens.’

Organizing resiliency
‘Collaboration is also a word from this conference’ said Dutch special water envoy Henk Ovink who addressed the fact that many city leaders were looking for collaboration on innovative solutions.

‘Many talks took place on how to make cities more resilient in a formal way, for instance by organising a good water governance programme but also in a more informal way when including the citizens’.

Ovink reminded that collaboration is a very old tradition in water governance in the Netherlands. ‘We now use this experiences in our collaboration around the world. It is about listing, learning and mixing experiences’, Ovink said.

Below a selection of photos, giving an impression of the 2018 edition of the Singapore International Water Week and Dutch related contributions.

Sustainable cities by closing the loop 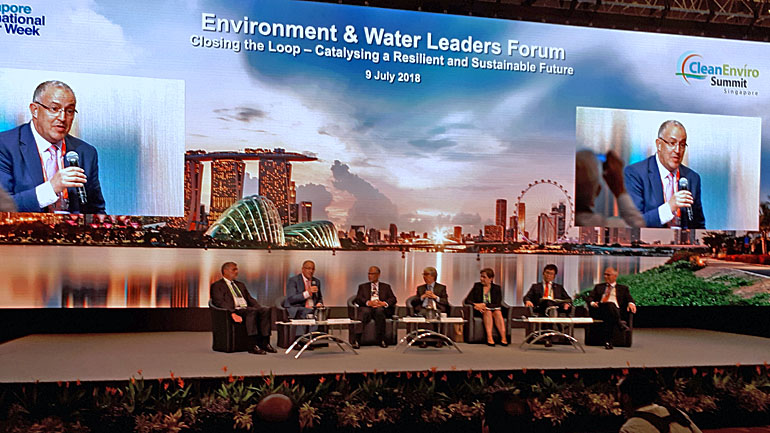 Mayor Ahmed Aboutaleb (second left) of Rotterdam participated in several forum sessions such as this one on the circular economy where he supported new building regulations to make houses more eco-friendly by for example using surplus heat from waste incineration and industrial estates. 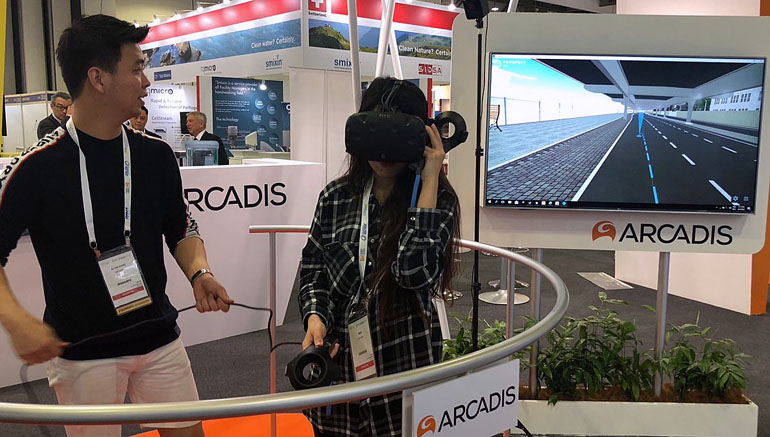 Consultancy firm Arcadis-Asia had a special corner at their booth where visitors could ‘walk’ into Building Information Modelling (BIM) of water projects. Furthermore Arcadis presented its integrated water projects in many Asian cities, such as Wuhan (Sponge city) in China, Guwahati in India (Smart City) and Singapore (Deep Tunnel Sewerage System).

Ready for the digital (r)evolution? 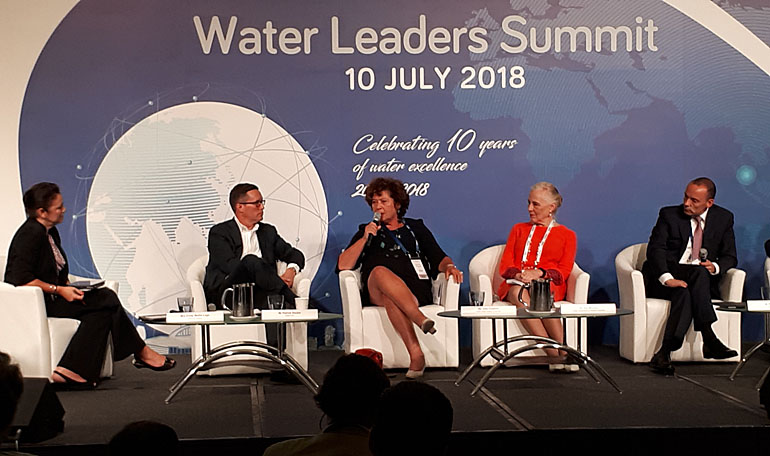 One of the sessions of the Water Leaders Summit was on the digital revolution and the response by water utilities. Director Joke Cuperus of the Dutch water utility PWN (with microphone) predicted the fast automation and control of the water treatment process with less human intervention. The panel advised utilities to reward personnel to get involved in automation and gain experiences, rather than discourage them and try to prevent failures. 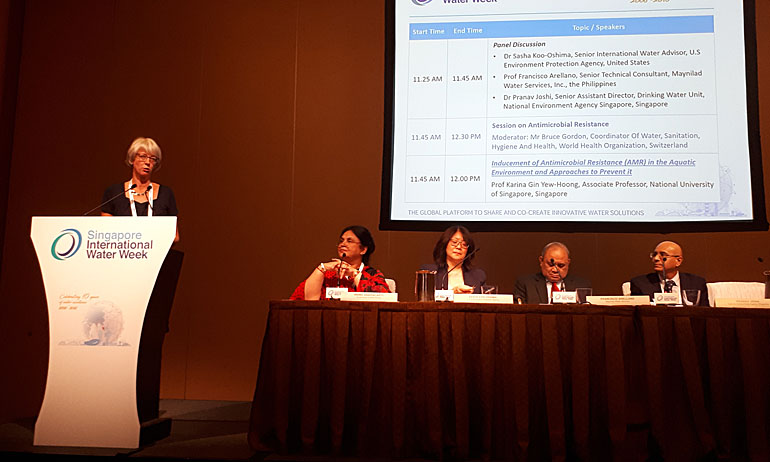 Real concern or fake news? That was the subtitle of the special workshop on substances in water of which the environmental impact is not yet fully clear. The bad news was that more and more substances are emerging to be present in surface and ground water. The good news is that we already know much about their persistence, mobility and toxicity and water authorities can handle accordingly. Professor Annemarie van Wezel (left) of KWR research institute told about the signalling concentration value of 0.1 microgram per litre as generally applied in the Netherlands for surface of groundwater. When a concentration of an unknown substance exceeds this value, the substance is automatically tested on its persistence, mobility and toxicity. 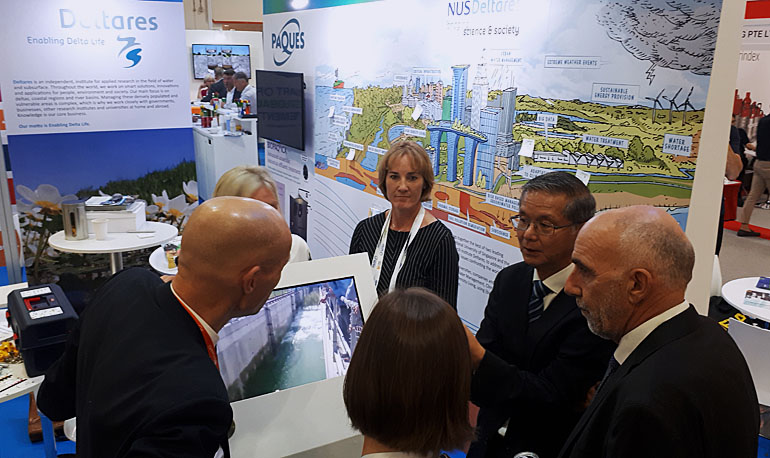 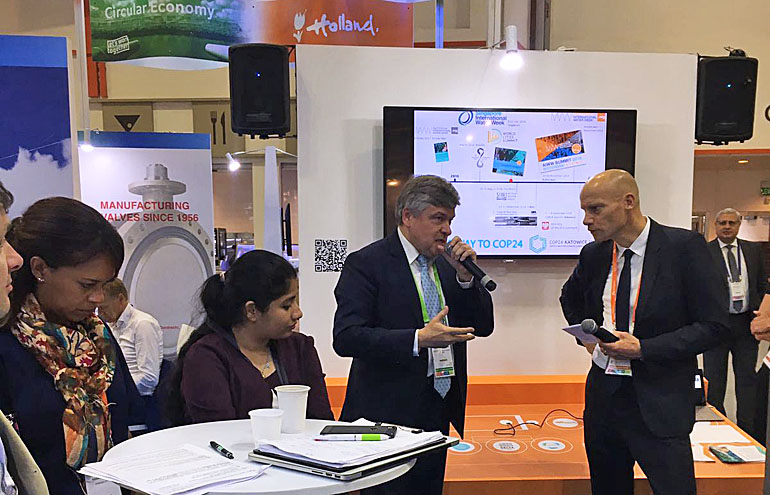 COP24 Special Envoy for Climate Change, Tomasz Chruszczow (with microphone) participated in the dialogue session on Climate, Water and the City in the Netherlands pavilion. Chruszczow underlined the importance of cities to take the lead in the climate debate. He supported the initiative of 44 larger Polish cities to work together on the development of their climate adaptation plans.

Three new CeraMac-plants in the making 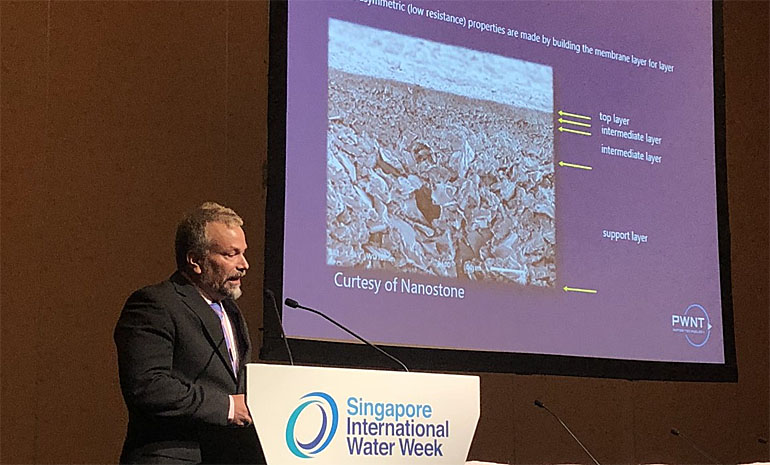 Chief Technology Officer Gilbert Galjaard at PWNT gave a presentation on CeraMac membranes and how they are build-up in different layers. PWNT is about to complete the construction of new CeraMac-plants in Switzerland, England and Singapore for the production of drinking water from surface water. 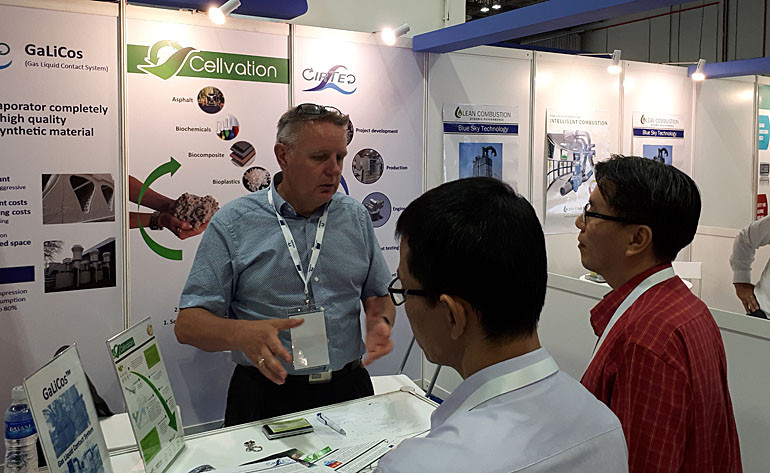 Coos Wessels of CirTec spent much of his time at the conference explaining how his company makes a business case out of separating toilet paper from incoming sewage at a municipal waste water treatment plant. 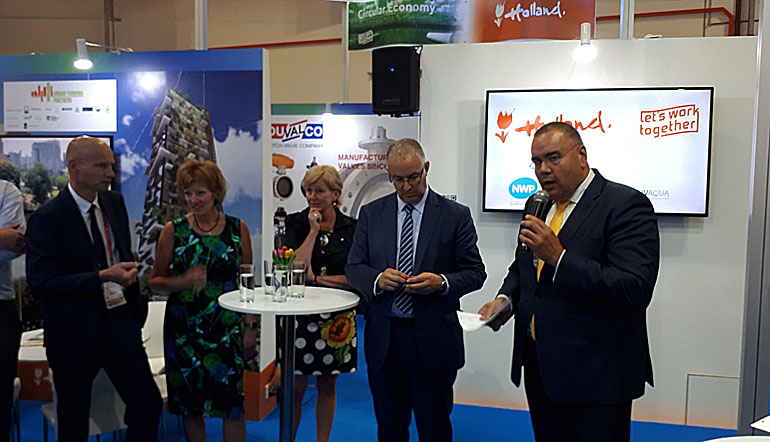 At the traditional networking reception in the Netherlands pavilion, Dutch delegation leaders praised the involvement of many Dutch organisations in regional and global collaborations. Special water envoy Henk Ovink (left) said to be proud of this culture of collaboration. Menno Holterman (right), in his function as chairman of the Managing Board of the Amsterdam International Water Week, looked already ahead and invited everybody to come to Rotterdam on 14-16 November to join the AIWW Summit in Rotterdam on 14-16 November, just prior to COP24 in Poland. 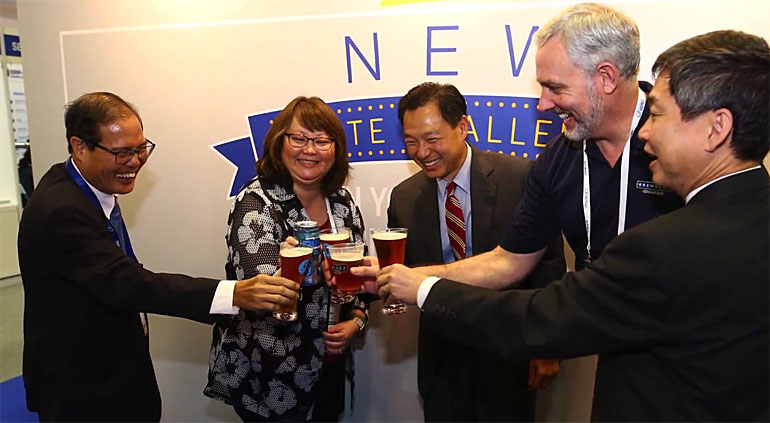 Cheers! The Singapore delegation, together with a representative of the Brewerkz brewery, marked the 10th anniversary of the Singapore international water week by drinking a glass of Newbrew beer, specially prepared from reused Newater. The launch of Newbrew was a public outreach opportunity to highlight how Singapore's high-quality recycled Newater is well within international standards of safe drinking water.