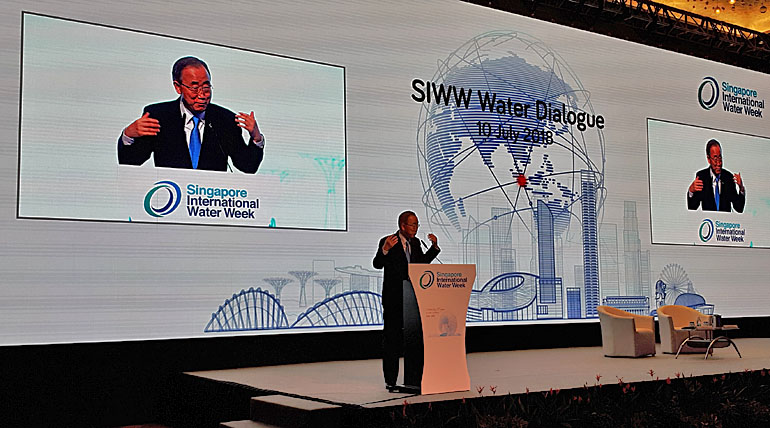 ‘The water industry is slowly adapting to climate change, urbanisation and population growth. I salute their effort’, said former UN Secretary-General Ban Ki-moon in his opening key note at the Water Leaders Summit of the Singapore International Water Week on 10 July.

Ban Ki-moon confirmed to have accepted an invitation by Dutch Prime Minister Mark Rutte to head a special climate adaptation committee of the Global Centre of Excellence on Climate Adaptation (GCECA), based in the Netherlands. 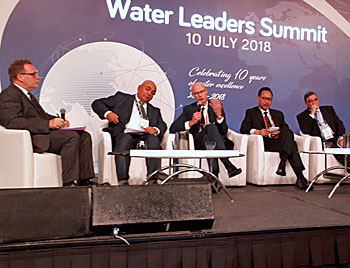 Pledge for multilateralisme
In his keynote, the former Secretary-General of the UN denounced the growing nationalism in the world. His message was to strive for more multilateralism. ‘Let us work together on achieving the Sustainable Development Goals’, Ban Ki-moon said. 'We will live in a world short of water. We are all in it together so let us construct bridges amongst countries.’

Later during the Water Leaders Summit, Dutch water envoy Henk Ovink joined a panel discussion on future solutions. Ovink too pledged for achieving the Sustainable Development Goals. He noticed that water is a cross-cutting issue, affecting most of the goals. 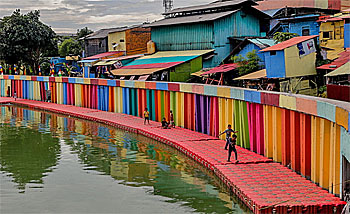 The Water as Leverage programme aims to generate projects to solve water issues in three Asian cities with multiple targets, not only water.

'And if things go wrong, the consequences are often felt outside the water sector. This complicates the financing of measures to solve water problems, as water is not fully valued', he explained.

Therefore, the Dutch government launched the programme Water as Leverage, that includes the Asian cities Chennai (India), Khulna (Bangladesh) and Semarang (Indonesia). Civil engineers, landscape architects, urban planners, scientists and non-governmental organisations have been challenged to form interdisciplinary teams and to start pilots in these cities to solve complex urban issues with multiple benefits, such as social coherence, mobility, safety, renovation and recreation.

The idea is that multiple targets will allow the teams to raise more money for the project than just for water solutions alone. This summer the teams will be announced that will start the pilots.

Read also on this website
• SIWW 2018: ‘Growth of cities is to stay, get used to it’, 10 July 2018
• COP23: Launch of GCECA centre to speed up worldwide climate adaptation, 15 November 2017
• Meet the Dutch water sector in the Netherlands Water Pavilion at SIWW2018
• Expertise: Resilient cities