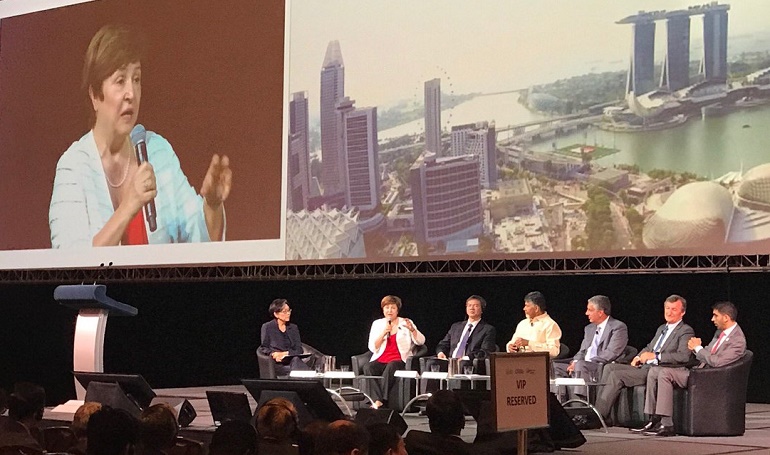 ‘Cities will attract young people and they do not want to live in slumps anymore. They want jobs and transportation to get to work. The increase of cities is to stay’, said Chief Executive Officer Kristalina Georgieva of the World Bank Group at the opening op de 10th edition of the Singapore International Water Week.

She advised cities to facilitate this growth and develop capacities to deliver services and make private parties to invest.

In reaction, Global Director of Cities John Batten at consultancy firm Acardis said it is all about storm water attenuation, trapping flood waters and slowly releasing it. 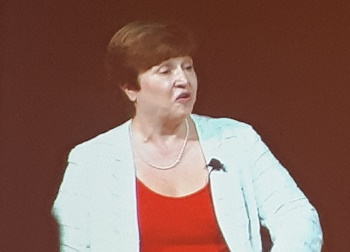 CEO Kristalina Georgieva of the World Bank at the opening session of the Singapore International Water Week.

Job providers
The opening of the Singapore International Water Week was mainly about cities as the event coincides with the World Cities summit. Several speakers mentioned cities as the main providers of jobs.

Kristalina Georgieva of the World Bank Group remarked: ‘The growth of cities is there to stay. We have to get used to that.’

According to Georgieva cities must facilitate this growth and offer the necessary services such as proper housing, transportation and food, energy and water supplies.‘They also need to attract the private sector for the investments’, she added.

A good urban planning is an important precondition and the opening sessions made clear that cities have high expectations from the fast-developing ICT-technology, including remote sensing and artificial intelligence. 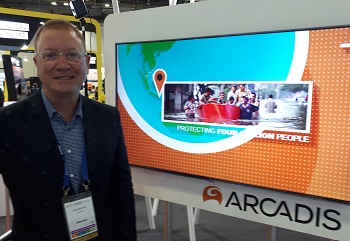 Global Director of Cities John Batten at the Arcadis booth in the exhibition area.

Storm water attenuation
To make a city more liveable the handling of storm water is becoming a crucial factor. ‘It is all about attenuation’, said John Batten of Arcadis in reaction to what was said at the opening session.

‘Storm water is normally seen as a nuisance. The rain water is transported out of the city as quickly as possible. Yet, it is an important resource for greening and cooling the city. And it is also to be used as resource to make drinking water, as is done here in Singapore”, said Batten.

Replumb cities
Batten likes to call it the replumbing of cities. ‘We have to level the peak flows and retain the water in the city. And water utilities shall need to deliver more drinking water, with less available water resources.’ ‘Turn storm water into an asset and use it to bring in the green’, Batten advised the cities.

Arcadis works around the globe in cities as Wuhan (China), San Francisco (USA) and Melbourne (Australia). ‘In Rotterdam, we successfully work with the municipality on the creation of green roofs. It does not only cools the city, but it also levels the run off to the sewers’, said Batten.