The ceremony took place at the Netherlands Water Pavilion where head of the new office Arno Kops (middle on photo) pressed a red button together with Khoo Teng Chye (right), Executive Director of Centre for Liveable Cities, Singapore and mayor Ahmed Aboutaleb of Rotterdam city (left).

Witteveen+Bos has been active in South-east Asia for nearly 40 years. Initially the consultancy company mainly operated in Indonesia. However the regional market has grown considerably, which is one of the reasons why the company has decided to establish a new regional office in Singapore.

The new office is headed by Arno Kops, who currently serves as regional manager for Southeast Asia. Arno Kops gained a Master of Science degree in Civil Engineering from Delft University of Technology in 1993, joining Witteveen+Bos that same year. He served as head of the Jakarta office from 2000 to 2004. 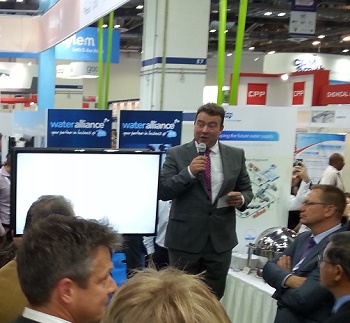 "We believe that exporting Dutch expertise by posting Dutch employees abroad is not cost-effective in the long run. We have to focus more on local expertise and be willing to share our knowledge. We can only remain a truly top-class firm by attracting the best engineers in a favourable labour market".

"Singapore is one of the places where we can achieve these goals. The local population is highly educated. The National University of Singapore and Nanyang Technological University are awarded high scores in various international performance rankings. In addition, the country offers a high level of legal certainty and transparency", Kops added.

The planned population growth from 5.2 million residents today to 7 million in 2030 puts the liveability in Singapore under pressure. Kops: "People are increasingly living and working underground because of the limited amount of space available. The government is already implementing measures to reduce particulate matter pollution and noise nuisance, but much work remains to be done. We can make an important contribution in this regard."