"All delta cities in the world share the same problems, so let us work together and act now", Dutch minister Melanie Schultz van Haegen said at the opening plenary of the Singapore International Water Week 2014 on 2 June. It is time for international cooperation, the Dutch minister said and she extended an invitation to partner with the Netherlands in its pro-active attitude and no longer wait for water-related disasters to happen.

The Dutch minister for Infrastructure and Environment warned that disasters will continue to occur in the future, whether it concerns floods, droughts, water pollution or land subsidence. By international cooperation it is possible to make a difference, she told her global audience.

Global initiative for risk mitigation
As vice chair of the High level Experts and Leaders’ Panel on Water and Disasters (HELP) minister Schultz also discussed the preventive measures at the meeting of UNSGAB, the advisory board on water and sanitation of UN Secretary General Ban Ki-moon. 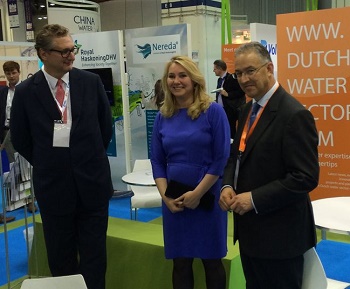 "The Netherlands has been working with water for more than 800 years. Anno 2014 flooding, water shortages and pollution are still worldwide big challenges. The Netherlands wants to reach out to other countries and help. We want to be leading in the world of water and sustainability. I feel a moral obligation to rapidly make our knowledge globally available, she said at the UNSGAB meeting.

Cities as initiators
The opening of the Singapore biannual water event coincided with the World Cities summit and therefore the plenary focused on the abilities of cities to act as initiators of sustainable measures and investors in climate proof infrastructure.

"Cities used to be associated with social constrains, now they are seen as places of change and opportunities", said UK
minister of State for cities, Greg Clark at the opening plenary.

Danish environmental minister Kristen Brosbøl remarked upon the potential of the citizens. "We should make it easy for citizens to act sustainable. It gives them responsibility and joy."