Development organisation SNV supported a recent workshop in Vientiane, Lao PDR where development workers were taught to become Community-led Total Sanitation (CLTS) trainers and how to use this concept in rural villages in Lao PDR.

Hardware combined with behaviour change
Community-led Total Sanitation (CLTS) is an approach for mobilising communities to eliminate open defecation. It is based on the assumption that just providing toilets does not guarantee their use, nor does it result in improved sanitation and hygiene.

In other words, providing sanitation hardware must also be accompanied by behaviour change.

Moving forward, the participants will design their own course and be tested for their suitability in order to become “master trainers” who are capable of training more CLTS experts in the future. 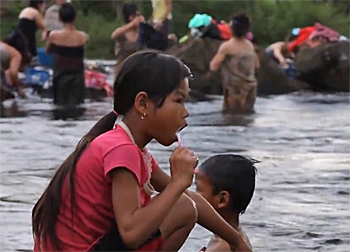 Only three tutors
In Lao there are only three master trainers in Laos who can educate future CLTS experts. In total there are only 200 CLTS facilitators, with the necessary knowledge.  More, however, are sorely needed.

"We are tired. There are not enough trainers in Laos", said Ms Chanthalangsy from Lao-based Participatory Development Training Centre (PADETC). "We can’t travel all the provinces to train people", says Ms Phetmany from SNV.

Thateng district open defecation free in 2015
Workshop participant, Korlakan Boudsaba, Deputy Director of Thateng District Health Office in Sekong Province, is enthusiastic about using CLTS back home because 50% of people living there have access to toilets, but they go underused.

The young doctor has started working with CLTS in 2008 and can still see the impacts from back then today. "That’s why I chose to work with CLTS", says Mr Korlakan. "We plan for Thateng to be open defecation free by 2015." 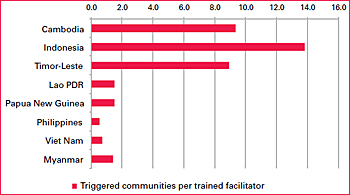 This is coupled with an emphasis on illustrating the facts and dangers about open defecation and its negative impacts on the entire community.

This method has earned much praise around the world. According to Dr. Ving from Nam Saat, there are three main respons for this praise: First, it is low cost. Second, it ensures the participation and responsibility of the whole community. Third, CLTS is sustainable.

Scaling-up total sanitation
"This workshop was absolutely necessary for scaling-up CLTS in Laos", said Thea Bongertman, responsible for Water, Sanitation and Hygiene at SNV Netherlands Development Organisation in Lao PDR. The Dutch NGO was the first to pilot CLTS in Lao PDR and to produce localised tools and manuals. "We constantly supported CLTS and helped the government to adapt it into its national strategy."

This news item was originally published on the website of SNV.

In March 2013 Unicef published a report on the introduction of CLTS in East Asia and Pacific:
Community Lead Total Sanitation - Progress, Lessons and Directions (download as pdf-file,136 pag.)

Residents of a rural village in Savannaket Province in Laos decided it was time to 'clean up' their community. After realising that the old practice of open defecation was unhygienic and dangerous for their community's health, they decided to build toilets and promote their use, becoming a 'Total sanitation village'.