The company is to install eight screw pumps in the new pumping station: two duty screws 2.1 metres diameter and six stormwater screws each of which are 3.75 metres diameter. The screws are over 20 metres in length and weigh more than 55 tonnes each.

The new station is part of a major refurbishment by Yorkshire Water of its Bransholme lagoon, a stormwater catchment next to the river Hull.

The project has been awarded by Black & Veatch who are the principle contractor for Yorkshire Water. 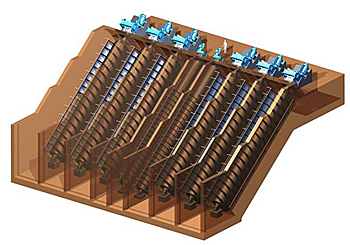 3D impression of the two duty screws (middle) and the six stormwater screws to be installed by Spaans Babcock.

Flood protection
Spaans Director Mark Brown who has been involved in the project from the development phase which commenced more than four years ago, states: "We are delighted to be working with both Black & Veatch and Yorkshire Water in delivering this prestigious project which will help to protect the Bransholme and Kingswood areas from flooding at time of heavy rainfall".

The six stormwater screws will each have 560 kW main drive motors and have a capacity of close to 4,000 l/s each, hence each of theese large screws can lift 4 tonnes or 880 gallons per second.

Archimedes screws are ideal for this application as the large flights and clearances allow the screws to handle the debris often found in storm water without blocking.

The other significant advantage is that the pumps can be run dry, this means they can be tested periodically without flow to give confidence that when they are required to run in anger they will do so. Spaans are installing monitoring systems which will analyse the equipment under both loaded and no-load conditions.

More storage capacity
Since the 2007 floods, Yorkshire Water has invested significantly in Bransholme lagoon. One of the investments concerns a 1.8 m high new sheet pile wall to double the storage capacity of the lagoon. Another investments are the construction of a new spillway from the lagoon to the RIver Hull, and the replacement of the current 40-years old surface water pumping station.

This news item was originally published on the website of Spaans Babcock.