What are you looking for?
News 3 September 2016 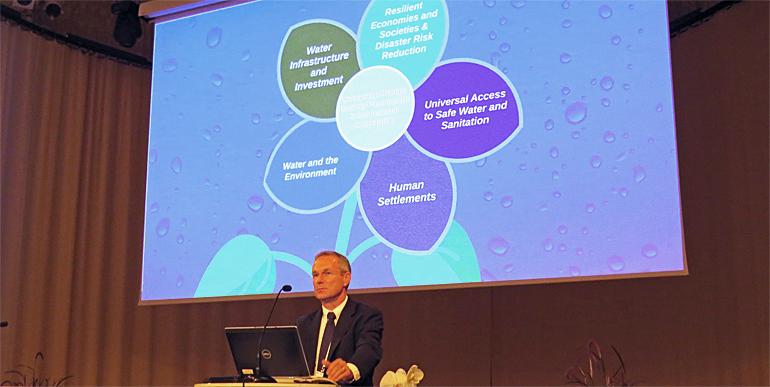 "We need to jump start on the implementation of the sustainable development goal #6 on water. Therefore we have identified areas where we think the big movements must happen", said Hungarian 'sherpa' Csaba Körösi, while showing a glimpse on the plans of the High Level panel on water (HLPW) at the Stockholm World Water Week on 31 August.

The HLPW was launched by the United Nations earlier this year and includes 10 head of states and their assistants (sherpas). These sherpas met during the Stockholm World Water Week to discuss the panel's plan of action.

Körösi (on top photo) told the gathered global water community in Stockholm that the full action plan will be released in New York on 21 September at the United Nation's annual General Assembly. 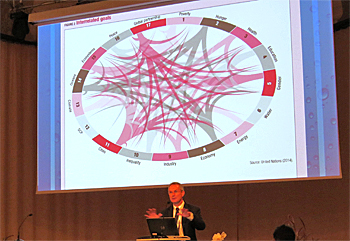 Complexity of global water issues
By revealing five identified areas, Körösi showed that the high level panel wants to embrace the complexity of the water issues by establishing crosslinks with other goals such as resilient infrastructure (SDG #9), disaster risk reduction (SDG # 11) and nature preservation (SDG #15).

One of the crosslinks - often mentioned in Stockholm - is water and disasters. Many disasters are water-related. So by taking preventive measures on flood and drought, the water sector can contribute to reduce the impact of extreme weather events, thus allowing more economic growth and reducing poverty, thus enabling more expenditure on water related measures.

Another example is the crosslink with agriculture. By improving rural canal systems, farmers can change to continuous drip irrigation and can produce more crop per drop. Thus supporting the ending hunger, improving health and combating climate change. 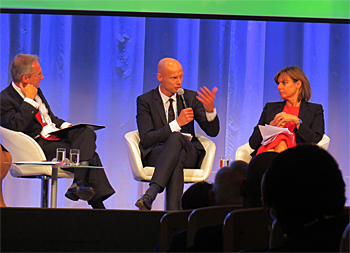 Home work for the water sector
To be able to address these areas, Körösi explained that the sherpas had identified three 'roots' that the global water sectors needs to improve:
● better water governance
● improve data on water
● improve valuing of water

Körösi urged his audience to innovate, collaborate and scale up: "Everyone's contribution will be critical".

The mandate for the HLPW goes for two years and the panel wants to be ready by March 2018 when the World Water Forum in Brasilia, Brasil takes place.

Process versus structure
Körösi did not address the issue of the institutes that will become responsible for achieving SDG #6. Informally this has been debated very lively in Stockholm. However, the sherpas wanted to prevent this discussion to dominate the more important issue of the process.

"Policy debate leads to negotiations", he explained "while an inclusive process for implementation leads to collaboration. We need the latter more than the first".

Better understand water complexity
Ovink reminded the water professionals that were present in Stockholm of the fact that such a process never ends. "We need to embrace complexity", he continued. "Implementation processes need to come from the understanding of the water complexity."

For the better understanding of this complexity and a comprehensive approach, Ovink warned for budget cuts on research. "It won't safe you real money but will cost a lot due to failing projects and missed opportunities. You spend a million on research, you spend a billion on a more impactful implementation!" 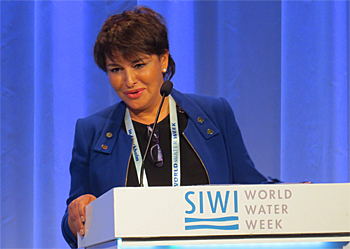 Morrocan water minister Hakima El Haite invited the global water community to give input to the next climate summit - COP22 - in Marrakesh.

Success of Paris
In Stockholm the global water community made clear it wants to build on the success of the Paris climate agreement.

As climate change has a big impact on water system, the water sector has a lot to offer to adverse the negative effects of a warming planet.

Moroccan water minister Hakima El Haite invited the water community to join the next climate summit, the COP22,  in Marrakesh.

"We realise that the success of Paris sets high expectations. In Marrakesh we want to be able to show the climate community that the water sector already has solutions for climate adaptation."

El Haite mentioned that COP22 will have a focus on drought, a huge African issue.