What are you looking for?
News 8 September 2014

This year's Stockholm Water Week again attracted over 3,000 attendees who care about global water issues. In 100 seminars, workshops and high level panels they talked about the latest developments.

Main topics were the growing water use by the energy sector and the post-2015 sustainable development goals.

Below a photo impression of some of the Dutch related contributions. 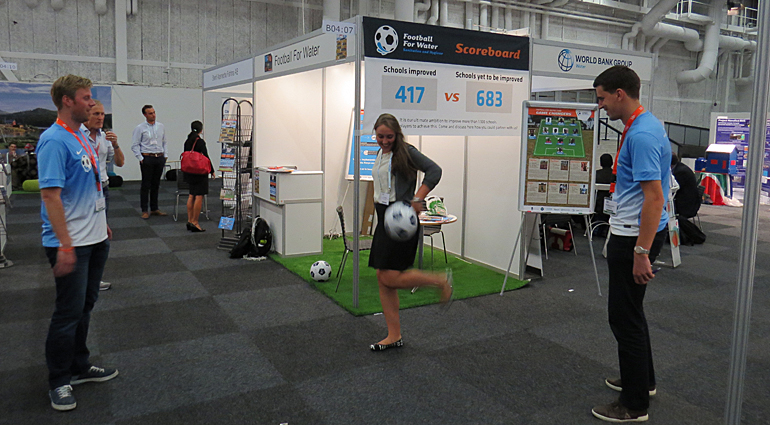 Pieter van der Manden (left) and Oeds-Willem Miedema (right) of the non-profit organization Football for Water having a good time with an American visitor in the exhibition hall. This joint initiative by the Dutch water sector and the Royal Dutch Football Association (KNVB) aims to provide over 1,000 schools in Africa with improved water and sanitation facilities as well as with football coaches and so-called life skill coaches. At the Stockholm Water Week it was announced that - since the start in 2012 - already 417 schools have been improved.

Grand Challenge for water and food 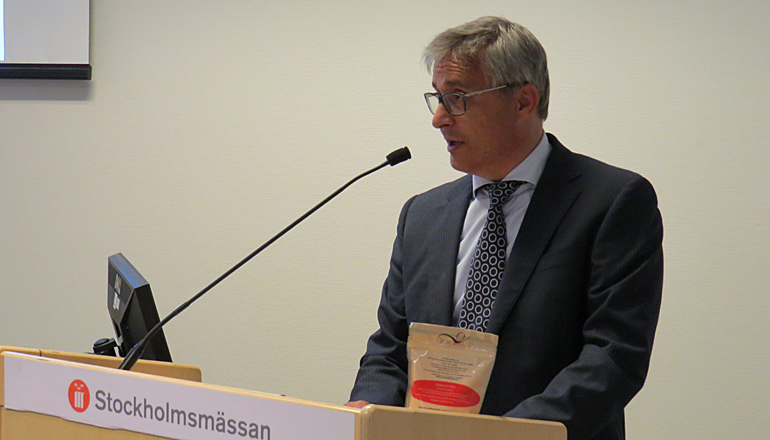 Robert van Loo, senior scientist at Wageningen University, is one of the seven Dutch winners of the Grand Challenge: Securing Water for Food, pitching his business case to introduce a salt-tolerant version of the superfood’ quinoa. This new developed quinoa version enables significant food production in saline soils, without the need for fresh water. All 17 winners will be awarded prize money to launch their breakthrough 'more crop per drop' solutions. 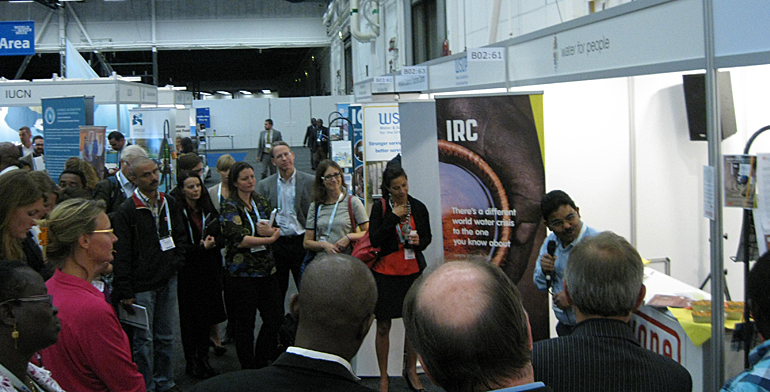 IRC water and sanitation centre launches the e-book 'Priceless!' that describes the five-year journey IRC took with partners worldwide to answer: how much does it really cost to provide a basic service. IRC Director Patrick Moriarty: "Priceless! shows how finance and economics are intimately connected with peoples aspirations to quality services: to water that does not stop flowing and is close to them; to a toilet they can use without feeling ashamed or disgusted". 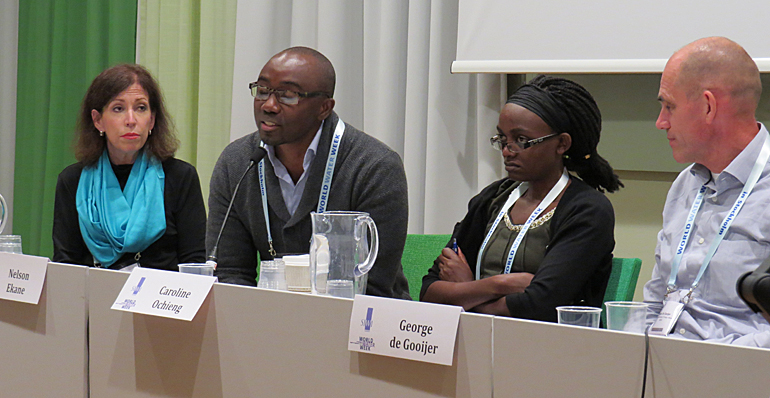 George de Gooijer (right), water expert at the Dutch Embassy in Benin finds himself in a discussion on Community Lead Total Sanitation (CLTS) versus Community Health Clubs (CHC). Water and health are closely linked but different aid organisations work in isolated projects without a social coherence. Projects in developing countries should built more on society capital and trust, as was mentioned at this session. 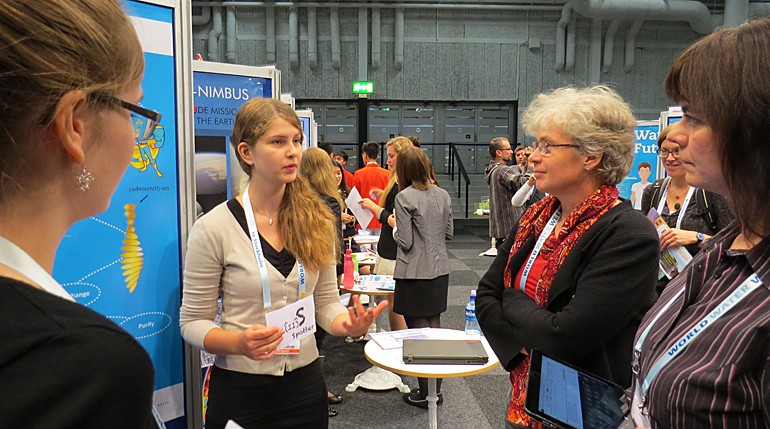 Hannah Spaander, student of the OSG Sevenwolden college, pitches the Dutch entry for the jury of the Stockholm Junior Water Prize. Her team has developed the Cadspotter, a simple optical sensor to detect cadmium in water. The sensor binds Cadmium II ions and changes of colour at a certain concentration.
This year the Stockholm Junior Water Prize went to Canadian student Hayley Todesco for her method to use sand filters to treat oil contaminated water and recover water for reuse. 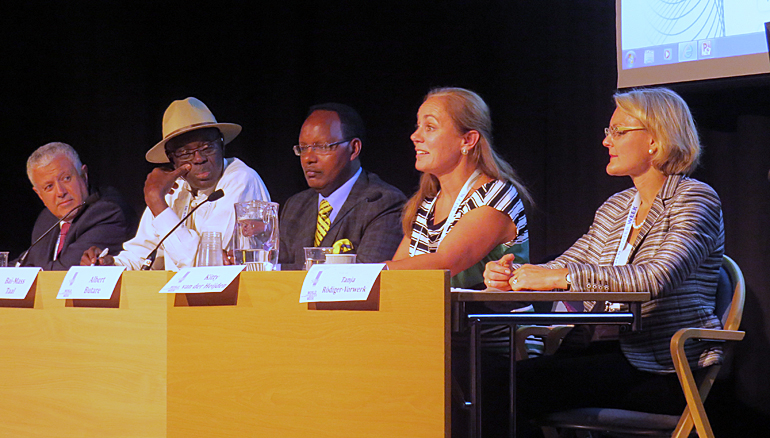 Kitty van der Heijden (second right), director of the Europe Office of the World Resources Institute, participates in a panel on the water goals in the new Sustainable development goals that are currently being debated in the United Nations and to be adopted in September next year. The discussion concentrated on the water-energy-food nexus and the necessity to seek cross coordinating collaboration between these sectors. 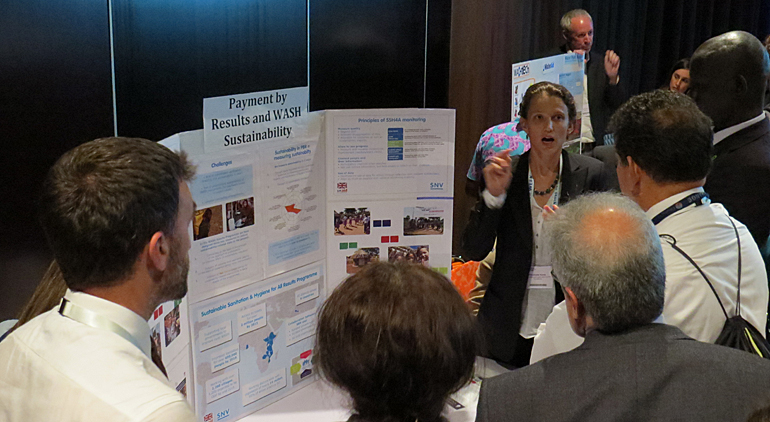 Antoinette Kome, SNV Netherlands Development Organisation, presents the concept of 'Payments by results' during the session on innovations in sustainable water and sanitation services. At the end of the session non-profit organisations were given the opportunity to pitch new tools to implement or monitor such services. SNV advocates the payment of non-profit organisations that deliver sustainable WASH-services on a bases of predefined and verified results. 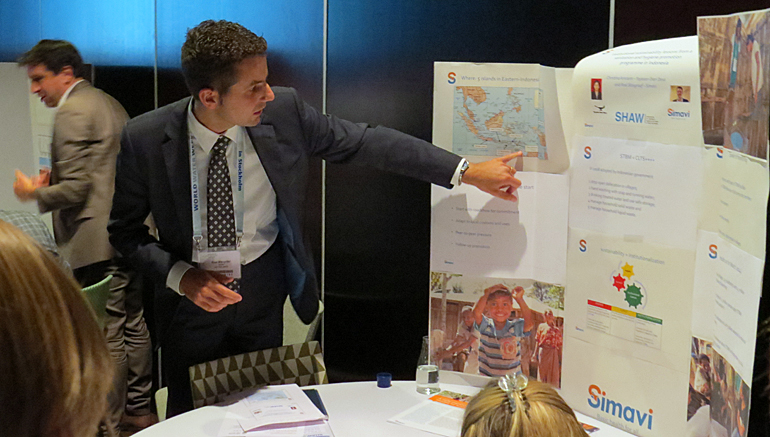 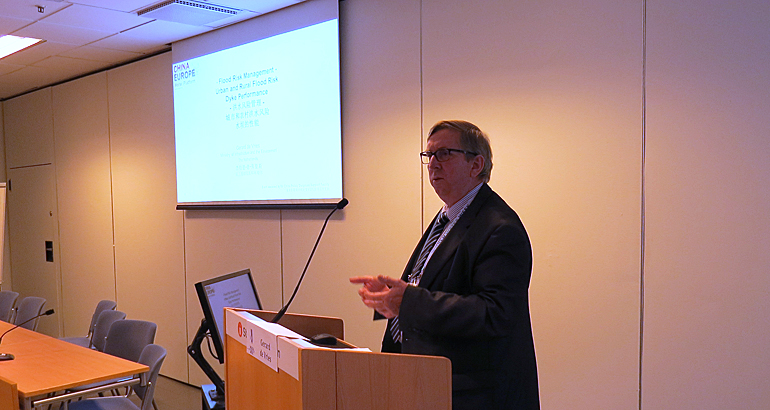 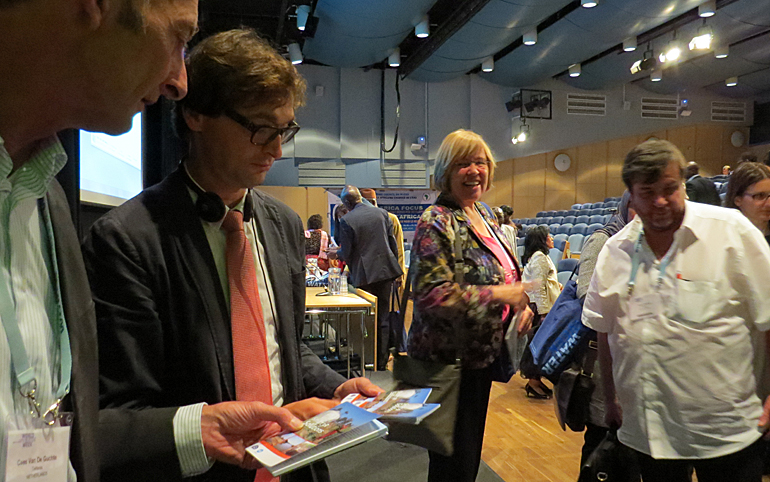 Joris van Oppenraaij, Netherlands Water Partnership handing out the launched booklet 'Smart 3R Solution' at the end of the African Focus session. The booklet is published by the Dutch 3R Partnership and describes six cases of small farmers in (semi) arid areas, taking simple measures to buffer rainwater in the wet seasons in order to have an additional harvest in the dry season. 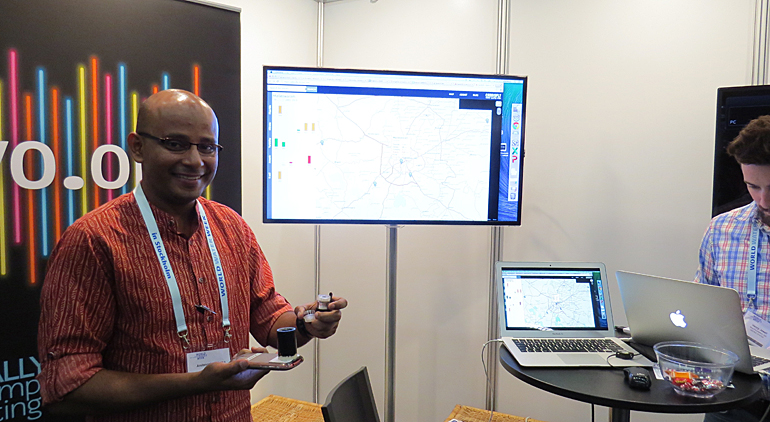 Amitangsu Acharya, Akvo India showing the latest innovation to measure fluoride in water, using an adapted mobile phone. Amsterdam-based ict organisation Akvo enrolls open access networks for collecting data on the quality of surface water. The data is collected by local people, using their mobile photos to collect and transfer their data to a central data base. All data is published online on the Akvo Flow Dashboard. Acharya is developing an application for a mobile phone that can determine the fluoride concentration in a water example by taking a photo. The mobile phone transmits the results to the central data base and made available online on a dashboard. 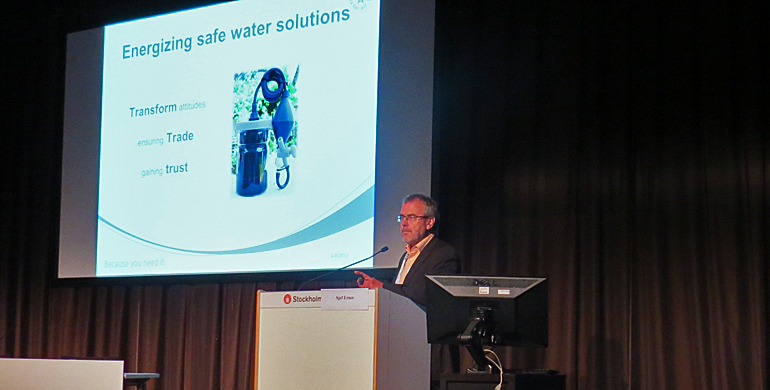 Sjef Ernes, director Aqua for All, at the seminar on joint deliveries of water and energy service. According to Ernes the energy sector is out performing the water sector in selling utility services in poor areas. "The water sector fails to see poor people as consumers", he said and challenged the water sector to develop new safe water services with an 'immediate consumer's satisfaction'. 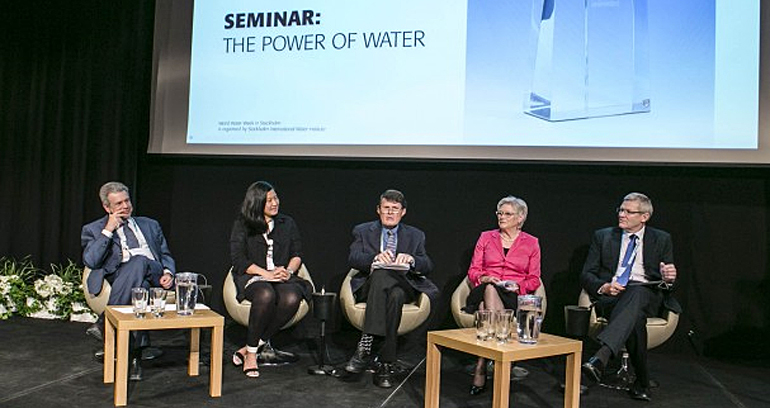 Executive director Maria van der Hoeven (second right) of the International Energy Agency assured the energy sector is aware of the looming water scarcity but admitted the sector can do more to reduce its water demand.

The next Stockholm Water Week will take place from 22 - 28 August 2015. The theme will be water and development.