What are you looking for?
News 4 September 2014 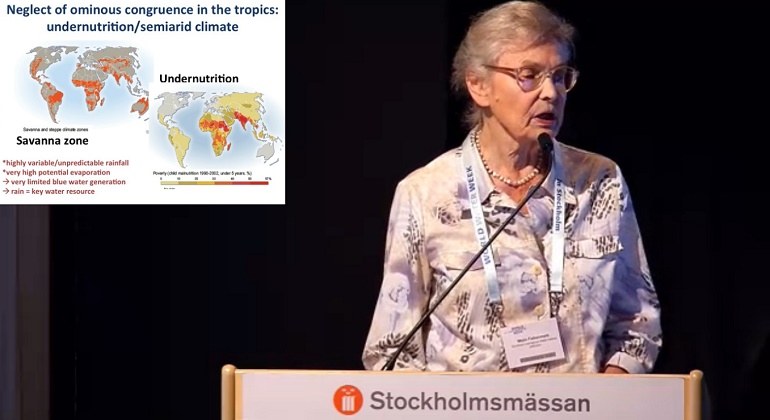 A group of renowned scientists and experts issued a declaration at the Stockholm Water Week on the importance of rainwater management in eradicating poverty and hunger.

Hydraulic professor Malin Falkenmark (top photo) of the Stockholm Resilience Centre addressed the statement and showed two maps (see above) illustrating the areas in the world with malnutrition (right) and the semi-arid Savanna zones (left). “They are converge”, said Falkenmark, “so in these areas rainwater is the key to eradicate hunger and poverty.”

The Savanna zones are characterized by highly valuable but unpredictable rainfall, causing floods in the rain season and drought in the dry season. For the 2 million small farmers in these areas rainwater is the main water resource. Better utilisation of the rainwater, can increase their productivity from 1 ton per hectare to a potential 5 ton, clarified the Swedish professor. 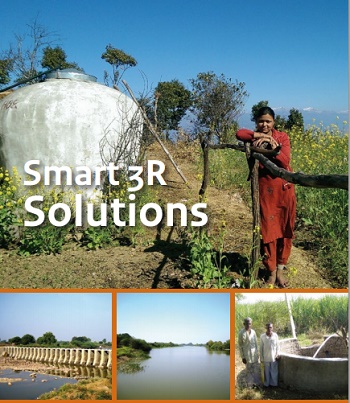 The concept of 3R is based on recharge, retention and reuse of rainwater – preferable in the underground - as part of integrated river basin management.

The booklet describes six cases, including some in the tropical dry lands, of small farmers in these areas taking simple measures to buffer the rainwater in the wet seasons in order to have an additional harvest in the dry season.

With the better utilised rainwater some farmers could harvest up to three times more.

The 3R Partnership combines Rain Foundation, Acacia Water, MetaMeta and Aqua for all. The concept has been developed in close cooperation with the International Fund for Agricultural Development (IFAD) and is now being applied in many catchments in the world. 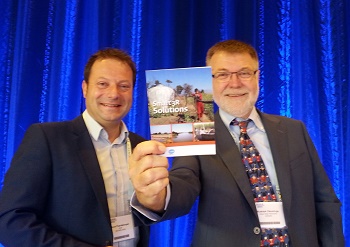 Co-producers Guus Paardekooper (left) of Rain and Rudolph Cleveringa of IFAD (and now working for GWP) proudly presenting the booklet at the Stockholm Water Week.

Integration in river basin management
“The 3R concept is developed by land and water specialists working on water projects in arid areas”, explains director Guus Paardekooper of the Rain Foundation at the Stockholm Water Week.

Paardekooper emphasises that on top of the smart individual measures for farmers, the 3R concepts puts land measures also in perspective of the (sub)catchment of a river.

“Here the knowledge of Dutch water management comes in", he says. "When many farmer start buffering their rain water, they influence the local water system and the downstream river discharge. So it is important for the government to coordinate the rain water management, together with all the other water users in the catchment. The 3R approach incorporates this coordination”..

The booklet Smart 3R Solutions can be downloaded (free of charge) from the websites of Bebuffered and Netherlands Water Partnership.