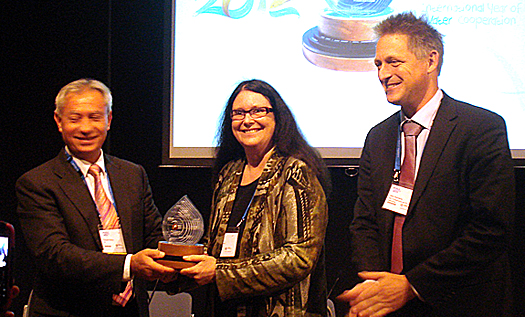 One of the first ceremonies at the Stockholm Water Week was the hand over of a statuette to the new organizers of the UN International Year and the World Water day 2013, Unesco and the Dutch government.

Pasquale Steduto (photo left), deputy director of FAO's Land and Water Division and organizer of this year's event, gave a statuette to Gretchen Kalonji of Unesco (middle) and Niels Vlaanderen (right) of the Dutch ministry of Infrastructure and environment on August 27.

The theme of next year’s World Water Day will be water cooperation. The main event is on March 22, 2013 and will be hosted in The Netherlands.

Develop an inspiring message
Gretchen Kalonji told Unesco was honored to be organizer for next year’s event. She pointed out the importance of water cooperation although she realized the theme has many dimensions. “It will be challenging to develop an inspiring message that will stimulate long-lasting cooperation around water.” She invited all organizations in the water sector to join Unesco and follow the example of Tajikistan that will organize an international conference.

Strong Dutch tradition
It was the theme that had challenged the Dutch government to take a strong role, explained Niels Vlaanderen. “Our country has a strong tradition in sharing experience”. It was too early for him to enclose the programme of the main event but Vlaanderen made clear that water diplomacy to prevent conflicts, will be a main issue.

Many different aspects of water cooperation
The many dimensions of water cooperation became clear during the seminar as representative of very different organizations in the water sector explained how they cooperate and what they expected from next year’s campaign. Alejandro Iza, head of IUCN’s Enviromental Law Programme pointed out that cooperation comes in where no laws exist, like inter-institutional and transboundary issues. “How can we bring people to the table without law?” he submitted the attendees of the seminar.

Johan Kuylenstierna of the Swedish Environmental Institute announced that next year’s edition of the Stockholm water Week will also have the theme of the water cooperation. Over 300 proposals for presentations had already been received and according to Kuylenstierna these could be categorized in five groups:

The official start of the UN International Year of Water cooperation will be at Unesco in Paris in January 2013.

During the seminar the official website of the event was launched. On the website is a slogan contest that will run till November 15.