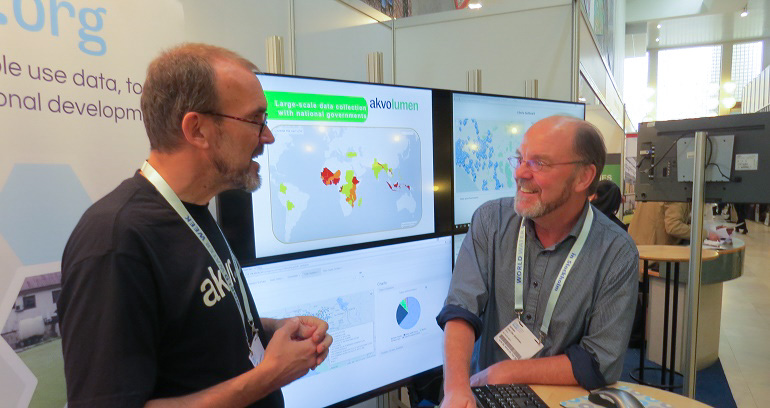 “It was ten years ago, here at the Stockholm World Water Week that I met Thomas Bjelkeman-Pettersson. It was at a time the conference, like myself, started to realise that we would not achieve the millennium development goal on water, had we not come up with new ideas”, remembers director and co-founder, Jeroen van der Sommen at Akvo Foundation. “Thomas proposed the use of open source software and open data into the development sector”.

Hydrogeological surveys
Ten years later, at their booth at this year’s Stockholm World Water Week, Van der Sommen looks back on Akvo’s history. He had been a hydrogeologist working in Africa and Asia for 10 years. When going back years later he learned that most data and reports where lost or ended up in file drawers.

It was clear to him that ‘it could make a difference’ if such surveys were published on internet so everybody could use them. “This is how we started ten years ago, publishing relevant documents for the development sector”, he recalls. 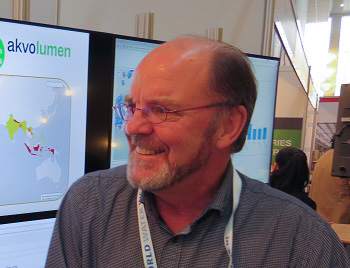 Reports on water aid projects
Soon Bjelkeman-Pettersson started to build open source software. The first product, Akvo RSR, was made for aid organisations to report online on the progress of their water projects in developing countries.

“It enables those organisations to inform the donors and the public on specific projects”, Van der Sommen recalls. “Akvo RSR became a tool to track projects, results, indicators, outcomes, showing the impact”.

The tool also included a button for viewers to donate money to a particular project. According to Van der Sommen this application is hardly used anymore as this kind of donating has been taken over by specialized crowdsourcing platforms. 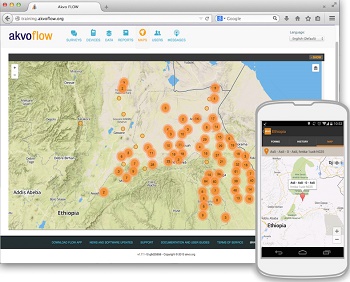 An Akvo Flow map of Ethiopia showing hundreds of locations of water facilities of which data has been collected using smart phones.

“Many organisations now use our Akvo Flow software and last year we have already passed the mark of two million surveys” Van der Sommen says proudly.

These surveys not only concern rural water but many surveys are on health, education, agriculture and nature” With SNV Akvo developed sensors to smartphones , for agriculture, water and air.

Emergency response
The big potential of Akvo Flow became very clear after the islands of Fiji and Vanuatu in the Pacific Ocean had been hit hard by cyclone Pam in March 2015. Previously Akvo had mapped all the water facilities on these islands.

Immediately after the disaster, Akvo personnel flew in and surveyed all these facilities again. This gave the relief organisations a clear view of the fresh water situation within a week. 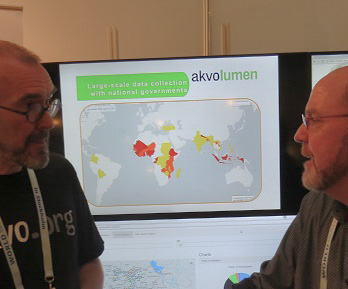 Automatic data processing
At their booth at the Stockholm World Water Week, Akvo shows its latest open source product: Akvo Lumen. It automatically processes the data of the field surveys and produce graphical displays, for instance on a dashboard.

“We can now cover entire countries and produce maps on the actual status of all water facilities.”

Akvo also started to develop hardware applications so smart phones can be used as sensors. One such sensor is the Caddisfly to measure fluoride in water.

According to Van der Sommen the combination of sensors and smart photo provides endless opportunities for all kind of water quality parameters.

“This would enable us for instance to constantly monitor water facilities in remote areas and know when they need maintenance before they break down”, he concludes.