What are you looking for?
News 6 September 2016

Stockholm World Water Week 2016: linking the global agenda on water and climate, a look back 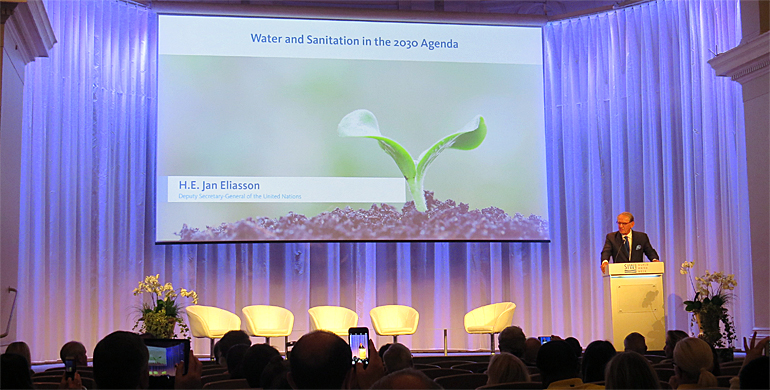 Again over 3,000 attendees from all over the world, came to the Stockholm World Water Week 2016 and talked about the global water issues and the United Nation's 2030 agenda.

Main topics were the joint implementation of last year's Paris agreement on climate change, the Sendai agreement on disaster risk reduction and the adoption of the 17 Sustainable development goals.

Secretary general of the OECD, Angel Gurria mentioned that these agreements provide the water sector with large windows of opportunities. "Our focus must be on implementation, implementation and implementation. Although not necessarily in that order", he said playfully at the opening plenary. 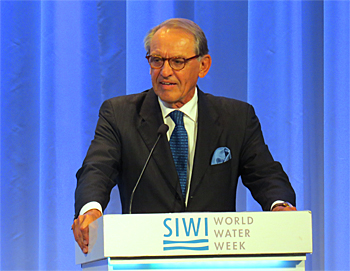 Water is about dignity
Later in the week Jan Eliasson, UN deputy secretary general delivered an impressive speech on water "as a precious resource that can never be taken for granted. Water is peace, water is life and water is dignity", he summarized.

"The answer lies in better management", Eliasson continued, "using what we have more wisely, more smartly, more responsibly. We have huge tasks ahead of us. But we also have great tools in our hands for water availability and water equity, not least with the new SDGs."

Below a selection of photos that illustrate some of the Dutch related contributions. 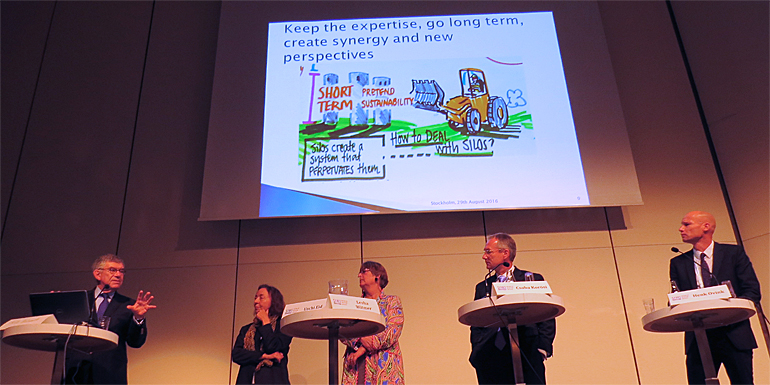 Director a.i. Fritz Holzwarth (left) at Unesco-IHE institute for water education joined a panel discussion on the need of an institution to show the fragmented water sector the way forward to achieve SDG #6. The panel was divided over the suggestion that an UN-mandated platform is necessary. 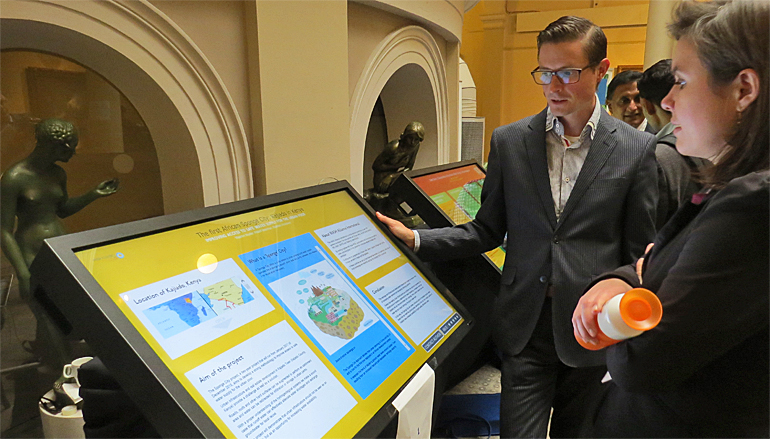 Maarten Mulder of AMREF Flying Doctors presented a digital poster on a study on the 'sponge city' concept, an underground that absorbs rainwater and releases it for reuse when it is necessary. Mulder explained that the concept is already applied in China and the United Sates. New about his study is the application in Kajiado city, Kenya, with large poor areas. He expects that citizens will react differently and will be less the willing to catch rainwater. 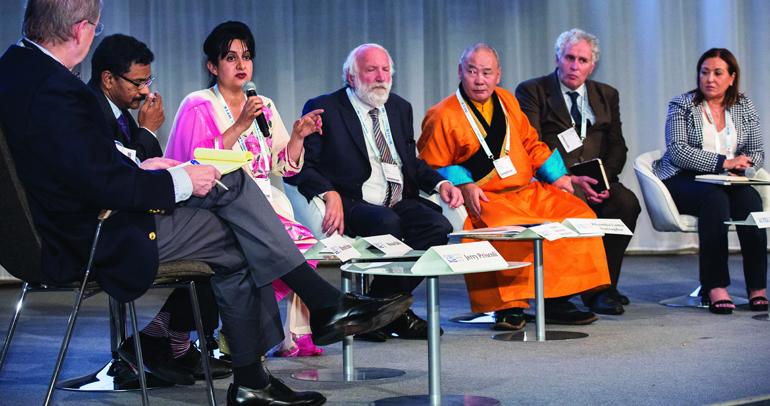 Representastives of global faith communities discussed how religion can contribute to the achievement of SDG #6. Rabbi Awraham Soetendorp (middle) told he was one of the founders of the Global Interfaith WASH Alliance (GIWA) that is engaging the planet’s many faiths to create a world with universal access to safe drinking water, improved sanitation and proper hygiene. 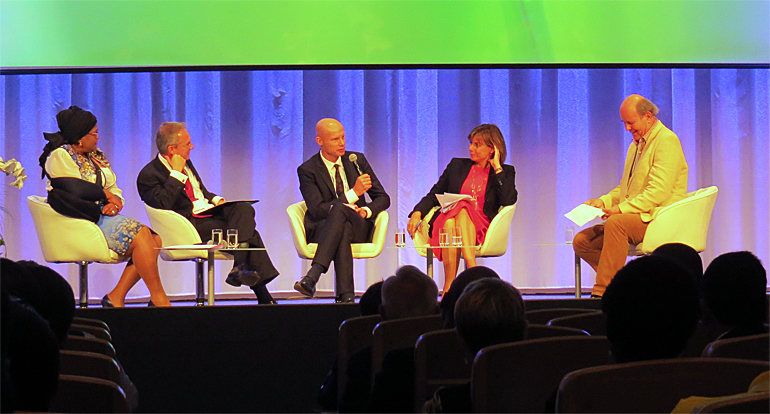 In a panel discussion that reflected on the required coherence to achieve SDG #6, Dutch water envoy Henk Ovink (middle) that water management - like in the Netherlands - will be there forever. He made a plea for ownership and involving youth. 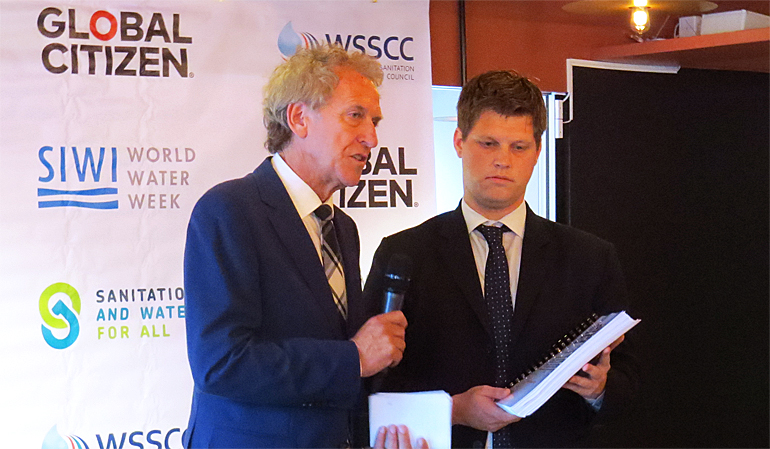 Senior advisor Dick van Ginhoven (left) of the Dutch ministry of foreign affairs received from Michael Sheldrick of Global Citizens movement a petition signed by 47,242 followers. The petition urges Dutch prime minister to follow through with the commitment that was made in 2015 by the Dutch government to provide 30 million people with clean toilets and 50 million people with clean drinking water by 2030. 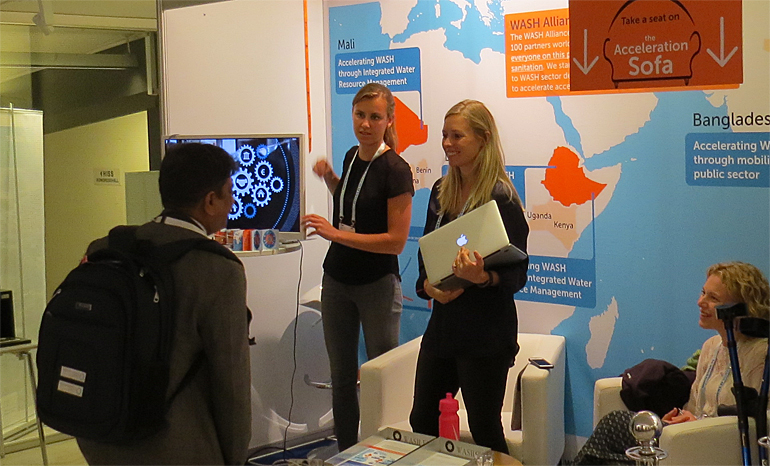 Nicoline Blokzeijl invites a visitor to take a seat on the 'Acceleration Sofa' in the booth of Wash Alliance International and discuss their personal recipe for acceleration of WASH with country coordinators from Ethiopia, Mali and Bangladesh. 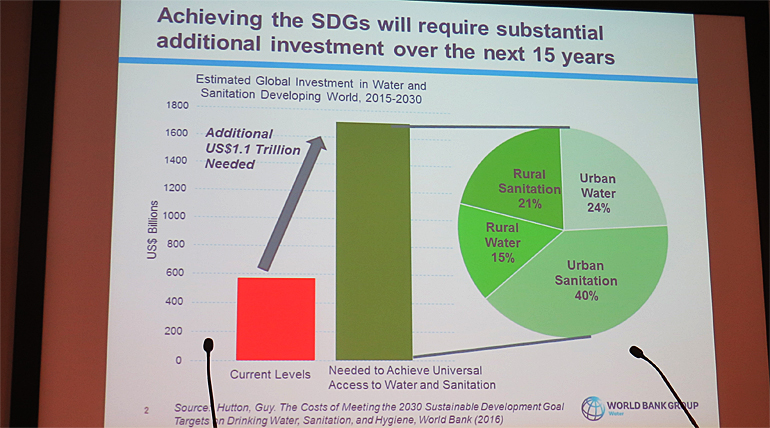 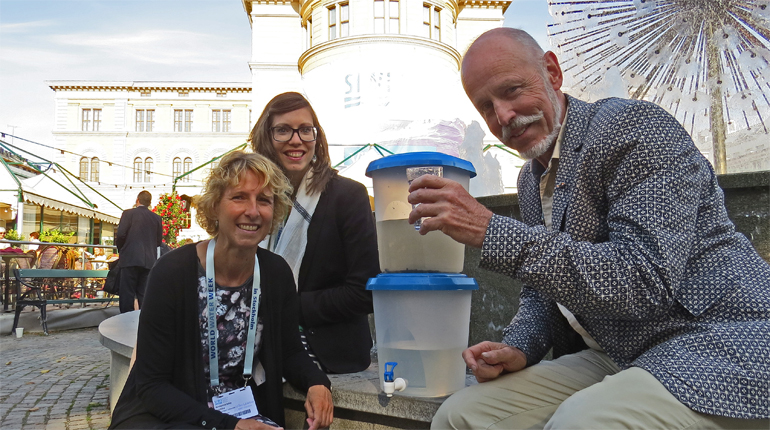 Annemarie Maltha (left), Jasmine van Driel (middle) and Henk Holtslag (right) of the Smart Centre Group showed the Dutch designed Tulip table-top filter which is now produced in Mali. The Tulip filter is one of the products that are offered at a Smart Centre that is affordable and easy to maintain.

The next Stockholm World Water Week will take place from 27 August - 1 September 2017.