Stockholm World Water Week 2016: Taking sanitation to the next level 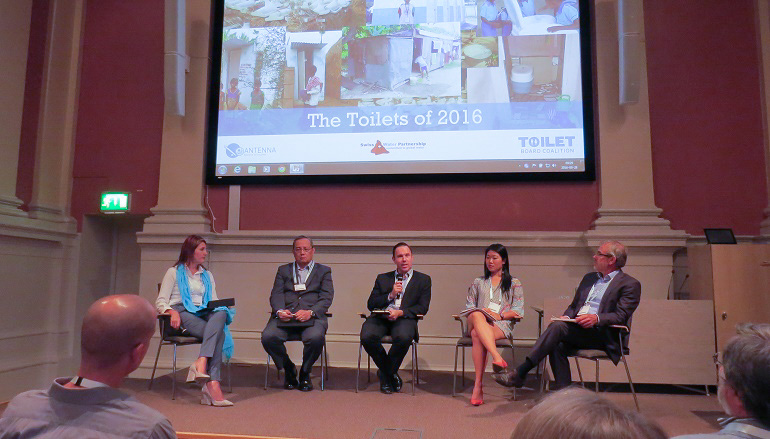 How to reach scale with sanitation? That was the central question at the session at the Stockholm World Water Week organised by Antenna, Swiss Water Partnership and Toilet Board Coalition on 28 August.

Worldwide 2.4 billion people still lack access to basic sanitation services, such as toilets or latrines. The aim of Sustainable development goal #6 is to reach universal access by 2030.

Speakers and attendees of the session were very much aware of the huge task ahead. Not to mention the proper disposal of the additional faces and urine. 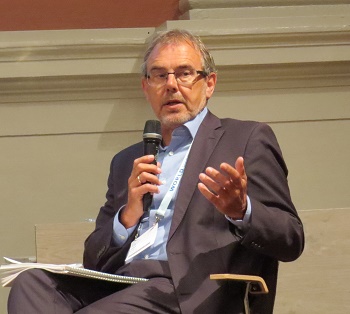 Director Sjef Ernes at Aqua for All advocates to use the power of the market to sell sanitation services as a consumer good.

Utilities as allies
“Utilities start taking interest in decentralised sanitation”, noticed director Sjef Ernes of Dutch-based Aqua for All foundation. As one of the panellists at the session, he emphasised the importance and he liked the sanitation community to encourage this development.

Utilities are normally only interested in building large sewage systems and waste water treatment plants. However, like Manilla Water in the Philippines, more and more utilities start to operate as a service provider to collect the waste water from pit latrines.

Limits to expensive collective sewerage system
“We must stop to see utilities as competitors”, urged Ernes. Utilities that operate sewage systems cannot reach out into remote areas of urban slums. Here the public toilets and the isolated pit latrine gets in.

All panellists were convinced that only the power of the market can bring this type of sanitation to scale. It was concluded that also the poor want a toilet in their home, although it can be difficult to install it in small sheds. 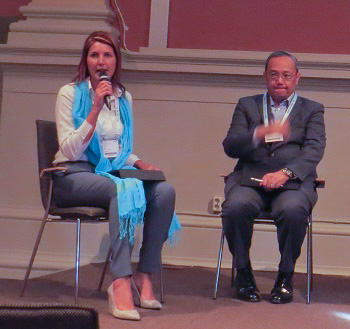 Director Cheryl Hicks at the Toilet Coalition Board (left) chaired the session on bringng the sanitation business to scale.

Filling the gaps
The idea was clear. Small companies are good in making sanitation products, utilities are good in logistics. Social enterprises can bring the two together for an aspirational home toilet in combination with a good service to dispatch the faeces and urine.

Executive director Cheryl Hicks of the Toilet Board Coalition and chair of the panel, mentions that the situation differs from place to place. “Go for the market and fill in the gaps to complete the supply chain”, she suggested.

“Become an actor yourself if nobody is active, or approach housing developer and tell them to include sanitation”, she told her audience.

Support from multinationals
“It is important to understand the value chain”, said Ernes of Aqua for All. Ernes is enthusiastic about the achievements by the Toilet Board Coalition so far. In only 18 months the organisation managed to actively involve a number of multinationals.

During the Stockholm World Water Week the coalition will decide on six sanitation projects that will receive a mentorship from the multinationals. “Safi Sana in Ghana is one of the candidates” Ernes adds. He is one of the initiators of this social enterprise that sales green energy and bio-fertilizer produced from waste and waste water.

“The support offered by the Toilet Board Coalition would enable Safi Sana to start a second plant and expand its activity in more Ghana municipalities”, according to Ernes.