‘We are driving a transformational agenda towards WASH delivery in Ghana’, said minister for Sanitation and Water Resources, Joseph Kofi Adda at his press conference at the Stockholm World Water Week on 28 August.

Adda was installed as Ghana’s water minister in January, heading a new dedicated ministry. At the press conference, the minister announced the water goal that Ghana has set for itself.

By 2025 the country wants to achieve ‘sustainable water and basic sanitation for all’ as formulated in the Water Sector Strategic Development Plan (WSSDP).

Dutch-based organisation IRC is working to help the government of Ghana to achieve this goal. 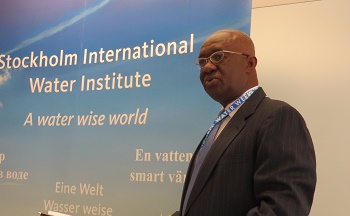 Drop in sanitation
According to Adda his country is making good progress on the access to clean drinking water, but on sanitation the situation is worsening as the number of people with access to proper sanitation is dropping.

There is not a single reason for this drop, said Adda at the press conference. The total population is raising, in addition there is a lack of infrastructure to collect the waste from pit latrines

Adda announced the construction of local waste collection stations that feed larger stations where waste can be turned into compost and energy at large scale.

Lowest in Africa
In July 2011 the World Bank upgraded Ghana to a lower middle-income status, yet the coverage for safe water, sanitation and hygiene (WASH) services is one of the lowest in Africa.

The latest United Nations statistics reveal that only 27 percent of the population has access to safely managed drinking water, 14 percent has access to basic sanitation. Cholera is endemic in Ghana. Diarrhoea kills about 14,000 children under five years annually. 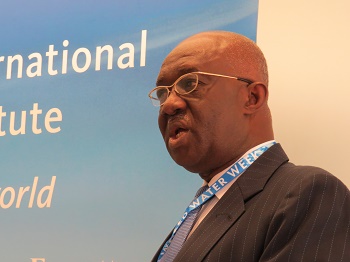 Double WASH-budget
The government wants to make the capital of Ghana, Accra, the cleanest city in Africa, eradicate open defecation by 2020, and construct 25,300 boreholes and 300 small water systems.

Donors contribute 19 percent currently, but it is likely to drop in the wake of Ghana’s promotion to a lower middle-income status. There is a reported annual funding gap of 200 million US dollar to achieve the country’s 2025 goal.

‘We shall have to double our WASH-budget’, said Adda. He has good hope that this will happen as the president is ’seriously dedicated’, the new water minister assured.

Huge task ahead
In a reaction, IRC-director Patrick Moriarty underlines the huge task ahead for minister Adda. ‘It will be an uphill struggle to reach the goals. As a knowledge centre we have supported many water projects in Ghana, especially in the field of sustainable water services.’

‘Much field work has been done’, Moriarty continues. ‘It is good that the government is now seriously picking up the WASH-issue on a national level.’

About IRC Ghana
IRC is an international think-and-do tank that works with governments, NGOs, entrepreneurs and people around the world to move from short-term interventions to sustainable water, sanitation and hygiene services.

IRC Ghana is based in Accra and has a team of some fifteen professional staff, supported by technical specialists from IRC in The Netherlands.