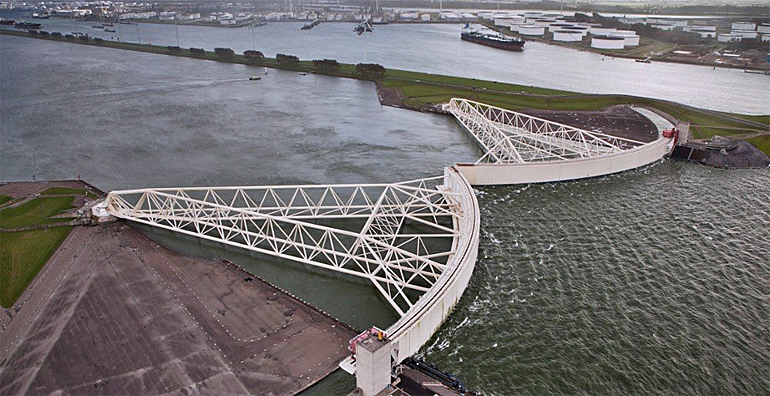 All five big storm surge barriers in the Netherlands were closed on 3 January as storm Eleanor crossed the North Sea with wind speeds up to 120 kph, causing a storm surge along the Dutch coast. It was the first time that Dutch national water authority Rijkswaterstaat closed all five barriers at the same time.

Most of the five barriers have been built in the nineties of the previous century as the final constructions of the huge coastal Delta Works project to protect the Dutch low lying hinterland. 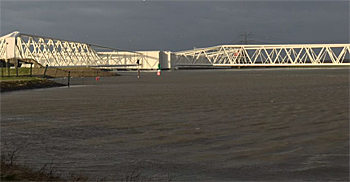 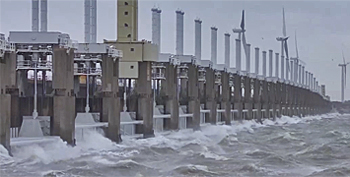 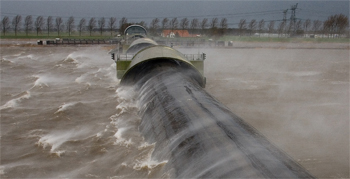 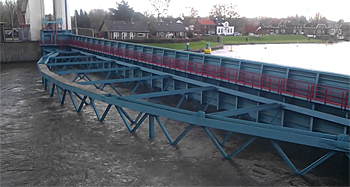 Automatic closure
A unique moment was the closure of the Maeslant storm surge barrier on the Nieuwe Waterweg that gives access to the port of Rotterdam.

The closure of the Maeslant barrier is fully automated. Based on wind speeds, wind directions and tidal movements a computer predicts the expected sea level. When the computer anticipates a surge of 3 meter, it automatically starts the procedure to close the barrier.

Adjusted cricital level
On the occasion of storm Eleanor, Rijkswaterstaat adjusted the critical level to 2,6 m to be able to test the closure of the Maeslant barrier under stormy conditions. It was the second time for the barrier to close during a real storm. The first time was ten years ago in 2007.

The closure of the Maeslant barrier is restricted as much as possible in order to give open access to the port of Rotterdam.

More frequently closed
The other big storm surge barriers operated by Rijkswaterstaat close more frequent. For the 4 km long Eastern Scheldt barrier it was the 27th closure of its sixty-two steel slide gates.

Rijkswaterstaat closes this barrier manually when a storm surge is expected of more than 3 meter. At his height Eleanor caused a storm surge of 3.6 meter in the South Western part of the Netherlands.

Rijkswaterstaat conducts routine test closures of its barriers annually in order to be able to detect possible technical or operational problems, so these can be solved before the storm season starts.

Thames barrier
On the other side of the North Sea, the British Environment Agency raised the Thames Barrier to protect London from flooding.

High tide levels combined with Eleanor's surge made the flood protection system to be closed for the 180th time since it became operational in 1984.