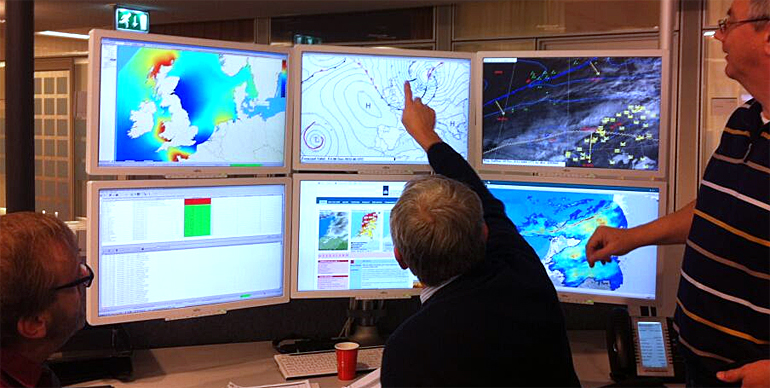 Storm Xaver put the Eastern Scheldt barrier (Oosterscheldekering) in the southwest delta of the Netherlands to the test. The sluice-gate-type doors of the nine km long storm surge barrier were closed on 6 December, just before a spring tide.

The combination of the severe storm and the spring high tide made the water level to reach a record height in the southwest delta that had not been reached since the disastrous flood that hit the delta in 1953.

Archive photo of the Eastern Scheldt barrier with closed doors.

The last closure of the Eastern Scheldt barrier was in 2007.It has been closed twenty-five times now since it became operational in 1986.

Except for some small local erosions to beaches and dunes, the Dutch coast defence withstood the extreme high tides without problems.

In the Netherlands, the extreme winds forecast did not materialize and sustained wind speeds did not exceed 100 km/h.

Spring tide near the Eastern Scheldt barrier
of well over 3 m (in red) on 6 December.

High spring tide
Meanwhile the raise of the sea level did exceed the forecasts.

At certain locations the combination of the storm and the spring tide made the water levels rise more than had been predicted.

In the southwest delta a spring tide of 3,72 m above level had been forecasted, but in fact the water levels reached up to 3,99 m, the highest level since 1953.

More information
Department of Waterways and Public Works/Rijkswaterstaat
The Hague, the Netherlands
+31 70 456 80 80
www.rijkswaterstaat.nl