The 500 years old clay-on-peat levee in the Leendert de Boerspolder, south of Amsterdam, finally collapsed very early this morning. The levee was subjected to a stress test to verify its real strength.

In recent weeks, the levee was first fully saturated, and little by little weakened by the excavation of a ditch at its toe.

Every week the ditch was made a little deeper. The last time that happened was last Monday. 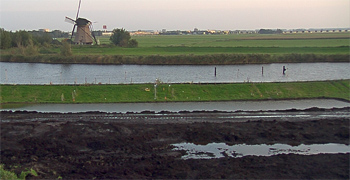 Situation at test site before the slide failure on Monday afternoon 13 October. 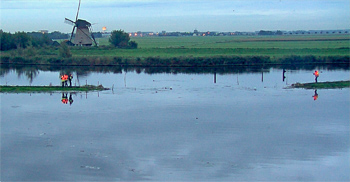 Situation after the slide failure on Tuesday morning 14 October.

Two hours warning by sensors
Many sensors and cameras were installed to monitor the stress test and its final failure.

This morning at 4.30 pm local time the sensors indicated that the levee started to move and two hours later, at 6.30 pm when it was still dark, the levee finally broke (on top photo).

The break was a scientific experiment to verify the real strength of a clay-on-peat levee. The Netherlands has 14.000 kilometers of dykes, of which 3000 clay dikes on peat.

The anlyses of the field test will take a few months and a final report is expected by spring 2016.

This news item was originally published on the website of Stowa (in Dutch only).

The test site can still be viewed on live stream: Leendert de Boerspolder.

Short video impression of the stress test with at the end - in the dark - the final slide failure.