On Sunday 8 June a 24m high concrete caisson hit the bottom of the Chioggia Inlet. The successful immersion by Strukton is the first in a series of eight caissons.

The caissons will hold the movable flood gates of the Chioggia flood barrier, one of the three barriers of the Venice storm surge barrier.

Strukton expects to immerse the last caisson in August. 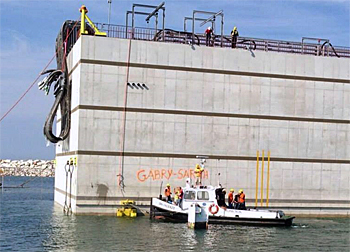 According to tradition Strukton baptised the huge caisson and called her Gabry-Sarah.

Concrete giants
The eight enormous 21,000 tonnes caissons were built in 2012 and 2013 in a dry dock. After construction, the dock was flooded where the caissons now float in the water, ready to transported and then immersed.

Tugboats are used to transport the concrete giants to the entrance of the lagoon.

Maximum 24 hours
Chioggia is home to a very large fleet of fishing boats, so the inlet blockage must be cleared as quickly as possible. The requirements state that the inlet must not be blocked for more than 24 hours.

The immersion operation also needs to take into account the large flow rate caused by the tides on the lagoon; the water flows through the inlet twice a day. In addition, immersion must be possible even with a wave height of 75 cm.

Preparations
The surveyors at Geocon, a subsidiary of Strukton Civiel, completed their activities in the construction dock in January and February 2014. The elements were dimensioned there so that all of the measurements needed to properly determine the place on the seabed are known.

MOSE Project
The MOSE Project is the largest engineering project in Italy and it has been in the works for a decade already. The project involves the construction of a storm-surge barrier in Italy to be able to seal off the Venetian Lagoon from the Adriatic Sea.

Strukton, as the lone foreign party, is helping Venice to combat high-water at Chioggia. 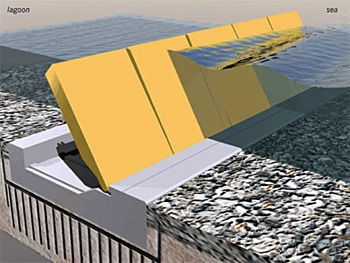 The flood gates are metal box-type structures connected to the concrete caissons with hinges, which constrain the gates to the housing structures and allow them to move.

In normal tidal conditions, the gates are full of water and rest in their housing structures.

At high tide the gates are filled with air to empty them of water, causing them rise up until they emerge above the water

The storm-surge barrier is expected to officially be put into use in 2017.

This news item was originally published on the website of Strukton.