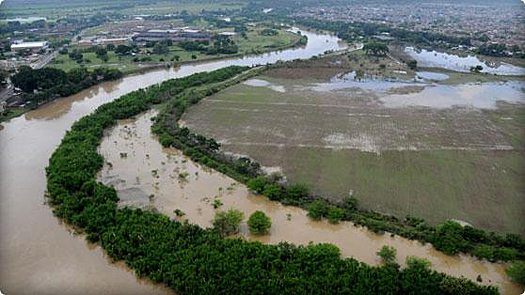 The Dutch engineering firm Royal HaskoningDHV presented its final recommendations for reducing flood risks in the Aguablanca district of the Colombian city of Cali on December 7th, 2012 in the presence of representatives of the Dutch embassy in Bogota.

An amount in excess of 330 million euro has been reserved for the implementation plan.

The study conducted by Royal HaskoningDHV in association with the Colombian consultancy Corporación OSSO consisted of defining short and longer term measures to protect, repair and manage the dike in the Agua Blanca district.

500 years flood protection
The dike is basically a well-built one dating from 1958 when the protected area was used almost entirely for agriculture. The safety level needed in those days no longer satisfies today’s standards. Over the past fifty years the area behind the dike has developed from an agricultural into a heavily urbanized setting. Economic growth is set to increase considerably in Cali and the surrounding area, and the same goes for more regional developments in the upper reaches of the Cauca River. This necessitates raising the safety level for the longer term. It has been recommended to plan for a flood risk with a return period of 500 years.

Six critical points in the dike must be repaired in the near future. A number of shut-off valves at an important urban drainage pumping station incorporated into the body of the dike are in urgent need of repair.

Organisation to maintain the dike
Other problems with the dike relate to organisational structures. It is unclear who manages the dike. Colombia has no water boards. Too many parties are involved in the dike in one way or another. A single authority needs to be assigned with overarching responsibility for the dike, its management and the works in and on the dike in the future.

Implementation plan
The Adaptation Fund has earmarked 823 billion Colombian pesos (332.5 million euro) to implement the 'Plan of Aguablanca Jarillón and Complementary Works' (PJAOC). The fund was created by the Colombian authorities. It is responsible for repairing and rebuilding infrastructural works damaged by the major floods of 2010-2011 caused by the La Niña effect.

Economic boost
More than 900,000 people who live in Cali’s Agua Blanca district will benefit from implementation of this plan. The strengthening of the dike and resulting improvement of water safety will also provide a significant boost for attracting new economic investments in the city.

Early 2013 a start will be made on putting the recommendations into practice by producing a plan of action and performing work.

This news release was originally published on the website of RoyalHaskoningDHV.