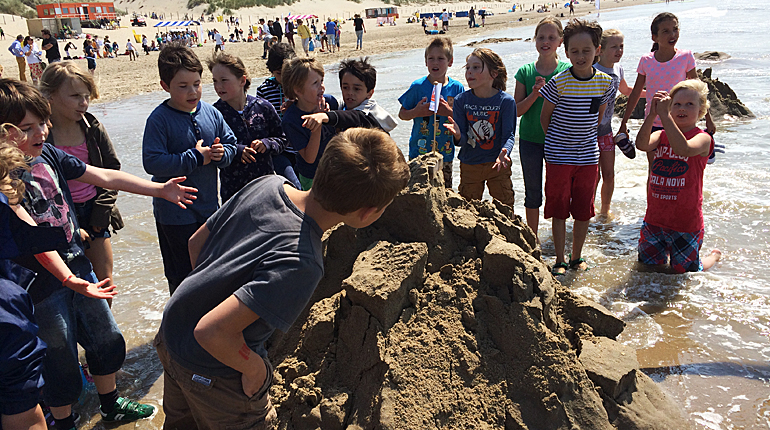 Excellent weather conditions were a good starting point, but above all it was the passion of the 25 school teams building the longest standing sand castle that made the first edition of the Battle of the Beach a tremendous success.

The first edition of the Battle of the Beach was held along the Dutch North Sea coast on 26 June.

Kids from primary schools were challenged to build their castle in one hour. It did not have to be a good looking sculpture but it had to withstand the upcoming tide as long as possible. 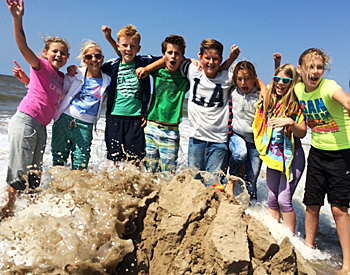 Flag on top
All sand castles got a flag on top and then it was for the tide to come in and to take down all 25 sculptures.

The last castle to stand up with its flag, was the one of the primary school De Flambouw from Nigtervecht, near Amsterdam.

Additionally a jury awarded the most creative sculpture and the most collaborative team.

Fading awareness of flood risk
The competition has been organised by two Dutch water boards to raise more awareness for flood protection in the Netherlands.

Since the major flood disaster in 1953 there has been no serious flood incident in the Netherlands and the flood risk awareness is slowly fading from collective memory.

The successful avoidance of flood disasters and the great trust in government has created an awareness gap. Dutch citizens tend to be less involved in water policy debates. In the future this may even erode their willingness to pay for the new flood protection measures.

The Battle of the Beach is to raise the awareness again, especially among the young generation.

Therefore prior to the competition on the beach the two water boards organised guest lectures at the primary schools on flood protection and the consequences of living below sea level. 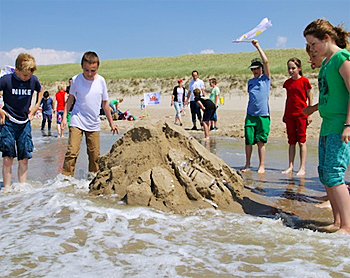 Clear message
Wiegert Dulfer of Water board Amstel, Gooi and Vecht noticed the clear effect of the competition: "It was heartening to see how fanatic the kids tried to protect their castles against the rising water. As a water board this is our daily work, keeping our feet dry."

Organiser Ray Hafkenscheid showed very satisfied with this first edition. He too was struck by the reaction of the kids on the devastating impact of the incoming tide. "They tried everything to keep the flag on top of their sand castle as long as possible, but the tide proved merciless and washed away all castles. It illustrates how important it is for our country to maintain our dunes and dikes."

Hafkenscheid expects to be able to announce the next edition of the Battle of the Beach soon.