Successful test closure of floating barrier in old harbour of Spakenburg, the Netherlands 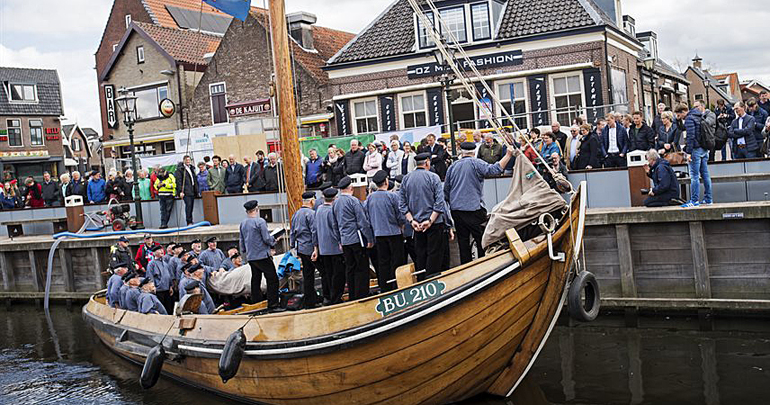 By pumping water underneath the lightweight elements of the self cosing flood barrier (SCFB) in the historical fishing harbour of Spakenburg, the Netherlands, the closure of the flood barrier was tested for the first time on 10 April. Witnessed by many locals and water officials, the barrier successfully rose to the planned height of 80 centimetres. The barrier has a length of 300 metres, making it the longest of its kind in the world. 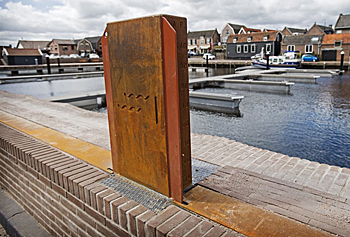 The only visible element is the panel for the manual control of the barrier. The panel also indicates the height of the barrier when it is pushed up.

Underground structure
The whole structure is installed into the pavement of the embankment. This was one of the design citeria for the flood protection scheme as this does not disrupt the scenery of the historical harbour.

At a certain water level in the harbour, the underground structure fills itself with water. The water pushes up the light weight elements that are made of plastic (Kevlar) with a steel cover.

Once raised, a support block locks the barrier into position, making it watertight.

Small foot print
The design of the self closing flood barrier also meets other requirements, such as its small foot print and the maximum deployment time of only three hours, requiring only a few employees of the water board.

The barrier protects the harbour against a once in a 1250 years flood event.

Inventor of the self closing flood barrier is Dutchman Johann van den Noort (age 72). He launched his SCFB-concept in 1998 and several barriers of this type have been built all over the world. 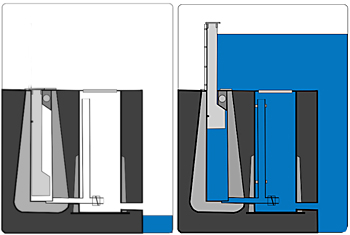 At normal water levers (left) in the harbour there is no water in the structure. At extreme high levels (right) water enters the structure and pushes up the barrier elements.

This news item is based on originally publications on the websites of Regional water authority Vallei and Veluwe (in Dutch only), National Flood Protection Programme and Hyflo SCFB.
(photo’s: Vallei & Veluwe/Marten van Dijl)

Installation of the first 80 meters of the SCFB barrier in the old harbour of Spakenburg, the Netherlands.