The Environmental Agency and its partners, Devon County Council and Exeter City Council, have awarded Team Van Oord to deepening the existing flood relief channel in the town of Exeter, to lowering the spill weir at the top of Trew’s flood relief channel and removing a ‘check weir’ at the bottom of the channel.

These works are the first phase of 30 million pound Exeter flood defence scheme that will begin next month in order to increase the flow capacity of the main flood channel. 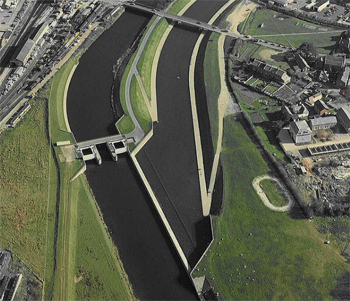 The scheme includes deeping of the flood relief channel (right) and reconstruction of the Trew weir (left).

When finished the new scheme will reduce flood risk to approximately 3,000 homes and businesses throughout the city.

Main scheme starts in 2015
Work on phase 2 is planned to start in Autumn 2015. This is the main scheme and includes work to some of the existing flood defence structures and increase the flow capacity of Trews Weir flood relief channel.

The full scope of this phase is yet to be decided following a public consultation this summer. 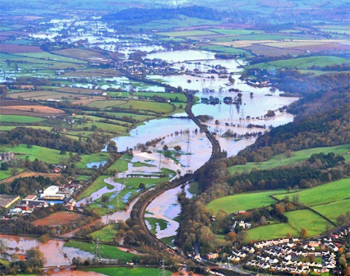 Flooding of the Exe river valley in November 2012.

Severe flooding
Exeter suffered from severe flooding in 1960 when over 1,000 properties were flooded twice within a few months and the city was cut in half.

A major flood alleviation scheme was subsequently designed and built (1965 to 1977) to defend the city against similar floods.

About Team Van Oord
Team Van Oord is a Joint Venture partnership between Van Oord, Kier Group, Mackley Construction and Royal HaskoningDHV who have been working together formally since 2006, but informally since 1996. The Joint Venture has 60 offices across the UK and can call on a pool of more than 2,000 highly skilled staff and operatives.

This news item was originally published on the the website of the UK Government.

1st May 2012; after a week of heavy rain the Exwick flood relief channel springs into action and diverts a huge volume of water away from the river Exe, averting the danger of flooding in Exeter. The channel was built between 1965 and 1977 following the devastating floods that hit Exeter in 1960.