Dutch grid operator TenneT has formally presented its plan for the construction of an artificial island in the North Sea to use as a hub for wind energy from the increasing number of offshore wind turbines farms. The plan envisions the collection of 10 GW-30 GW wind energy, as well as a power-to-gas conversion and storage in the form of hydrogen.

TenneT studied the option of a jacket-type fixed offshore platform but it proved more cost efficient to create an artificial island. 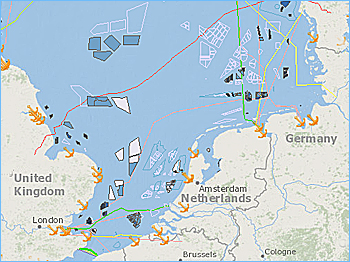 Current wind farm projects in the North Sea according to the world map on the website of consultancy firm 4C Offshore.

Five partners
TenneT unveiled a vision for a wind hub in the North Sea last year and signed an agreement earlier this year with Danish Energinet and German TenneT TSO for the development of the North Sea Wind Power Hub.

In order to connect offshore wind energy on a large scale and further offshore in a cost efficient way.

Dutch gas grid operator Gasunie joined the project in September, followed by the Port of Rotterdam in November. 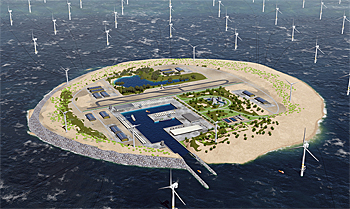 Impression of the early design of the artificial Power wind island as released by TenneT last year.

New studies
The five partners will be continuing with studies, expected to lead to the development of the hub from 2030 onward.

TenneT says that for far-offshore wind farms, a coordinated international approach with an island-based solution will be 30 percent more cost-effective than the traditional connection model with HVDC converter platforms on individual jackets.

According to TenneT, an artificial island could also facilitate a WindConnector link to the UK.

This news item is based on press releases published on the websites of TenneT and Port of Rotterdam.

Impression of the early design of the artifical island and its mobility to scale up when more wind energy will be generated in the future.