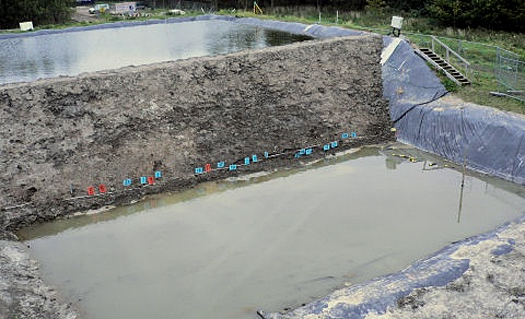 Geotextile positioned vertically in a dike can stop piping. That has been proven by an experiment in a real-size test dike on the IJkdijk location in

Bellingwolde, Netherlands. The experiment was conducted by research institute Deltares in the last week for the water board Rivierenland.

Good alternative for widening of dikes
Waterboard Rivierenland has to upgrade many kilometres of dike because of the risk of piping, a process that has a major impact on the stability of a dike.

The current measures, the widening of dikes or the installation of sheet piling, are expensive and they take up a lot of space. Geotextile could be a good alternative: it is cheaper, easier to install and it doesn't take up any extra space.

Now the experiment has been successful, the Rivierenland water authority will be looking to see whether the textile can be tested next year on a longer section of dike in the Rivierenland area.

Special geotextile
For the purposes of the experiment, the 'GeoDetect filter and detection system' supplied by Ten Cate, was installed over a width of 15 m and a height of 0.5 m in the clay layer of the dike.

GeoDetect measures and follows the strain in soil and enables transmission of a warning signal as soon as its elongation reaches a preset limit.

Geotextile has been used in hydraulic engineering for some time now but using it for piping is new.

The geotextile stopped piping for eight days, after which the experiment was terminated.

Little rinsing of sand and clay
Ulrich Förster, a Deltares dike specialist, was closely involved with the test. He is very enthusiastic about the result: ‘We had already conducted lab trials with the geotextile and the results were very promising. So we had high hopes for this experiment and we haven't been disappointed."

The outcome was surprisingly good to Förtser: "Even less sand and clay than I expected was rinsed out. We stopped after eight days because, in practice, that is usually how long high water lasts, with a risk of piping as a result."

Previous experiments at the IJkdijk location
The first major experiment at the IJkdijk test location was a macro stability test in 2008 showing that 42 hours prior to the actual breach the deformation had started precisely at the position where the dike finally collapsed. Sensor equipment had detected the premature subsidence in the dike.

Another experiment was a unique large scale piping test in 2009 that demonstrated for the first time the occurrence of piping and the actual collapse of a dike.

The piping experiment showed that a drainage pipe in the right place can prevent piping.

This news release was originally published in the website of Deltares.